As anyone who has tried raising a child in a British flat will probably attest to, space generally comes at a bit of a premium in these parts. Consequently, I recently took the decision to downsize from my (already pretty dinky) Maudio Oxygen 25 to a Korg NanoKEY 2. Was this a bad idea? Possibly. However I’m not much of a natural pianist and (weirdly) I actually feel more at home drawing envelopes than I do fiddling with physical knobs, so in the balance I  didn’t think I had that much to lose.

Taking it out of its box, the NanoKEY feels like quite a weird thing. Fractionally longer (but lighter) than a new Apple keyboard, it is definitely the ultimate portable – especially since it can be powered from an iPad’s USB bus.

Such physical attributes come at a cost mind you. Not only does the whole thing feel disconcertingly rattly, but the rubber pads that act as the device’s button controls seem highly reminiscent of the ‘dead flesh’ comments generally targeted at the keyboard of the original Zx Spectrum.  The plasticky keys also feel a bit cheap and give very little in the way of physical feedback. 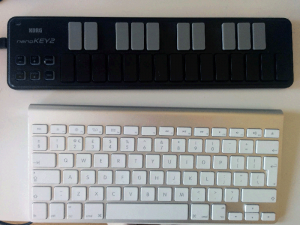 Needless to say, within about a minute of plonking it on my desk I was beginning to wonder if I’d made a terrible, terrible error. Crikey.

I’m pleased (and slightly surprised) to report, however, that as a composition tool the NanoKEY 2 is probably the best keyboard I’ve ever owned. Seriously. Yes, traditionally-trained pianists will hate its rather bizarre northward transposition of the black keys, but I’ve found their awkward-looking arrangement on the NanoKEY2 actually makes sense. I’m still not quite sure why, but a number of patterns which previously made sense only in theory, now seem much easier to visualise and play than they did on a normal keyboard.

In fact, on top of that, I’m now more accurate too. You’d probably think the move to a smaller keyboard should work the other way, but miraculously it hasn’t. The keys may feel a bit plasticky and not give as much feedback as traditional ones, but I think their slightly wider girth (combined with a slightly larger gap between them) makes them an easier find for my stupid clumsy sausage-fingers. 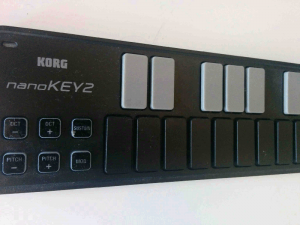 It’s a nice looking ting too

Oh, and it turns out the compromises I was worried about weren’t really compromises at all. Though the controls might have a slightly weird feel to them, they’re actually remarkably intuitive to use. This is especially true of the pitch bend which feels like it has much more contextual sensitivity than it rightly should. I bought my NanoKEY on the presumption that I’d be controlling most of my envelopes through the DAW, but as far as the pitchbend and sustain controls go I don’t think I’ve actually had to go back and edit anything yet. Blimey!

Intrigued? Well, we haven’t even got to the best bit yet! You see, all of Korg’s Nano range actually come with a decent array of bundled software.  In the NanoKEY’s case, it’s Korg’s Fantastic virtual M1, Applied Acoustic’s Strum/Analog/Lounge Lizard sessions (Guitar, Analog Synth and Electric Piano simulators) and finally UVI’s Digital Synsations (4 hefty recreations of non-Korg Digisynths.) It’s worth noting that all of these are cut-down versions of more expensive pieces of software, but each of them are still pretty powerful pieces of kit in their own right. I’d argue they’re easily worth at least £30 on their own.

In summary then, the NanoKEY 2’s a funny old thing. While the cheap-feeling exterior may not give the best first impression, there’s a lot to love about this little keyboard. Aside from the cheap feel, I haven’t really found any reason to question whether it would be a rugged companion to take on the road, and, when you factor in the ease of playing the thing and the amazing suite of software offered on the side, its good points seriously outweigh the bad. I’d reccomend the NanoKEY2 in a heart beat.

Want to hear some music made with the thing? Check out my newest track: New Year New You