If you’ve read any of my posts around here, you probably know that, if there’s one thing I love, it’s a good Sega arcade game. Consequently, I was VERY excited to recently discover one that I’d never played before: A.B. Cop.

Never heard of A.B. (Air Bike) Cop? Don’t worry, most of the internet doesn’t seem to have either. Not only is the wiki page entry for the game a mere stub, but the only document held by The Arcade Museum is a flyer. We’re definitely in pretty niche territory here.

Not that you could tell that from looking at the game in motion, mind you. In terms of design, A.B. Cop combines elements of Hang-On and Chase H.Q. to create the kind of twitchy and action-packed gameplay that defined the 80s/early 90s arcade experience.

Cast into the role of the title character, the player has to pilot his air bike (A.B.) through a series of 5 stages, tracking down groups of increasingly hardened criminals as they go. Each stage is split into two parts, with the player initially tasked with ramming each gang’s hapless henchmen off the road before having to take on a tank-driving leader in a high-octane one-on-one boss battle.

To help with this, the player’s bike has a couple of tricks up its’ mechanical sleeve. Alongside a (limited use) jump button that sends your bike flying into the air – useful for both avoiding obstacles and for smacking bosses in their weak points – releasing and then re-engaging the accelerator  unleashes a powerful booster that can quickly catapult you back into action.

As with many of the best arcade games, that’s pretty much all there is to A.B. Cop. Aside from the basic twitch gameplay of avoiding incoming objects and attacks, the most important skills being tested are the abilities to conserve your jumps wisely and time your boosts successfully. That’s about it. Each of the enemy gangs might be more difficult than the last from the perspective of despatching them within the time limit, but they don’t really present the player with much in the way of new obstacles or nuances. Consequently,  the whole experience can be completed, from start to finish, in about about 10 – 15 minutes.

And you know what? I’m alright with that. A.B. Cop is pretty much everything an arcade game should be. From an artistic perspective, the design is amazing. Though the cop himself isn’t amazing memorable, every other design attribute is pretty much on point: The backgrounds are bold, colourful and varied. The enemies (from coke-smuggling ninjas to people-traffiking clowns) are completely ridiculous. The pumping FM-powered soundtrack is catchy and memorable. Blimey, even the purely presentational elements are well designed and executed – the bizarre and highly memorable ‘scream-face’ continue screen sums up the tongue in cheek tone of the game perfectly.

On top of that, the gameplay is probably the closest video games can get to espresso. It may not really have any features that make it stand out directly from the pack, but the gameplay is a power and highly-concentrated nugget of arcade perfection. From the amount of enemies present in each stage through to the more subtler aspects of the bike’s handling, you can tell that every nuance of the experience has been finely tuned for immediacy. Everything this game has to teach you can be learned in the first minute. Everything contained within the game code can be experienced in the amount of time you’d spend waiting for a bowling lane to become available or for a cinema screen to empty. Is it a perfect game? No. Is it a perfect arcade game? Absolutely.

Yes. This is Strange

But, if A.B, cop is such an amazing game, why is it largely unremembered? This middling review may hold the key: Incredibly, what stands out  as remarkable today just wasn’t really that interesting at the time. As a result, A.B. Cop stands as a testament to a publisher at the top of the very top of  their game – a publisher who could roll-out throw-away titles for old hardware and still be streets ahead of their competition. It also represents a time when twitchy pick-up-n-play gameplay was second nature, when developers weren’t stuck in the rut of overly-familar genres and buried beneath the need for seemingly endless tutorial sections. A.B. Cop stands as a monument to a bygone era, and a timely reminder that games that are merely produced in an arcade-style are rarely a match for the real thing.

Thank you, Sega, for all the good times. 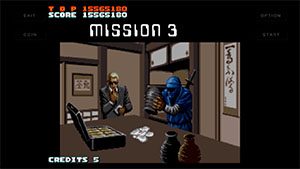