So yesterday I attended the Play Margate  gaming exhibition, held in the..err…lovely Kentish coastal town of Margate. Sun, sea and old video games –  What could possibly be better?

Before I begin, I’d like to note that i was only present for a couple of hours yesterday morning (thanks, mainly, to a slightly uncooperative (and four year old) Mini-FatNicK.) Despite this I think that overall I was around for long enough to get a pretty good idea of what would have been available for the rest of the day. 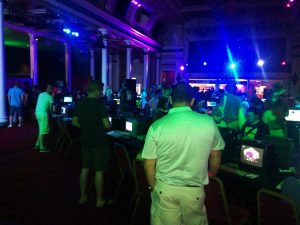 Entering through the trader area, I must say that Mini-FatNicK and myself were pretty much like kids in the preverbial sweet shop. In fact, even light (and highly sporadic) gamer Mrs FatNicK generally seemed to impressed.

Among the decorated consoles and apparently endless supply of Japanese NES games, there was a particularly tremendous (and massive) display put on by the guys over at Console Passion. Though the prices were predictably more than you’d pay in a dodgy auction, all of their games seemed to be in mint condition. I’d definitely give their website a look.

The stalls weren’t all selling purely console-related stuff, mind you. After Mini-FatNicK had successfully fleeced us out of a Donatello Turtle plush, we descended into the main hall.

Now, here’s where things got really interesting: although my eyes were attracted to row after row of retro consoles,  a quick look around revealed that  there was clearly something for everyone: To one side a handsome arcade/pinball area, PCs set up for some LAN gaming against another wall, a load of PS4s running a bunch of indie games AND entire zone dedicated to Minecraft…This was serious business. 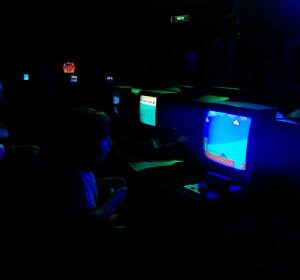 Having played the update on her DS, Mini FatNicK was keen to give the original a try

Getting back to the retro gear, there was actually a phenomenally good selection that – i felt – catered for pretty much everyone.

For younger kids who may not have experienced 8/16-bit machines, for example,  there were a large number of popular retro consoles running some obvious game choices (Street Fighter 2 on the SNES, Rocket Knight Adventures on the Megadrive, Robocop on the Spectrum etc.) As Mini-FatNicK is a fan of the New Super Mario Bros on her DS, it was great being able to let her loose on the original NES game for the first time.

Meanwhile, for more dedicated retro gamers, there were also plenty of more obscure machines which you most definitely don’t bump into every day. For me, a personal favourite was trying out Star Trek on the Vetrex, but there was also an Amstrad GX4000, A Phillips CDI an Intellivision, three different types of TurboGrafx, and Virtual Boy (which I couldn’t get near) to name but a few.

In fact, not to labour the point, but there were even some interesting varients as well. Along with a tiny Coregrafx running Ninja Gaiden (wow) there was also an Exerion-playing Sharp Twin Famicom. Blimey. 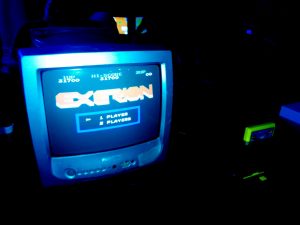 Oh, and then there were the arcade machines! Once again, the balance was just about right. Though there were a fair few obvious choices (Outrun, Donkey kong) it was nice to have a chance to play a couple of games that you don’t play every day – like Moon Patrol and Kung Fu Master (even if they did remind me of just how terrible I am with joystick controllers.) Though not really my thing, there were a lot of interesting-looking pinball machines as well.

Overall then, I was pretty glad I went along. There was lots of stuff I didn’t see that will undoubtedly appeal to some people (like the cosplay competition and tournaments,) but i think having the chance to get my sweaty mitts on some of the weirder hardware on display made it worth the price of admission alone.

Of course there were a couple of small gripes (it looks like some of the machines aren’t suited to being left on all day as a couple of them were offline, and from my personal perspective it would been nicer for more of the machines to have the sound turned up) but considering that Mini-FatNicK wasn’t in a particularly gamey mood, I think there was still enough there to keep all of us entertained. If it’s back next year, there’s a good chance we will be too. 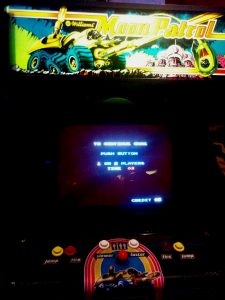 Moon Patrol! A Specrum game inspired by this haunts my dreams