Today we’re going to look at an unusual one: The Saturn Shinobi.

Hang on for a second, oh mighty internet pedants. I know tha’ts not its real name. The problem, however, is just what name do we use to address the Saturn’s Shinobi title? In Japan it was released under the slightly underwhelming moniker of “New Shinobi Story” (Shin Shinobi Den) it arrived in the US under the title of “Shinobi Legions” and finally arrived in Europe with the slightly snazzier name of “Shinobi X”. 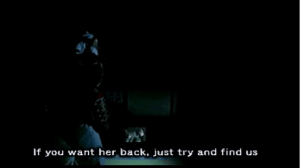 If you think it’s a bit weird that a game had a completely different title in every territory it was released in, things are about to get weirder still. In the US, Shinobi Legions wasn’t actually published by Sega at all. Instead, the game was licensed out to Vic Tokai. Though Sega of Europe were happy to publish the game themselves, they did insist on having the soundtrack almost completely rewritten by local hero Richard Jacques. Oh eck, it doesn’t look like there was a great deal of faith in the Saturn Shinobi, does it?

Why the lack of faith? Well one reason may have been the difficulties of leaping from 16 to 32 bit. If you asked me what would have made the best 32-bit Shinobi today, I’d probably lean towards a perfected Megadrive style of art direction. Rather than worrying about using the Saturn to its fullest potential, the designers should have just used the console’s monster 2d architecture and 32-operator FM chip to create an enhanced 16-bit style experience that was well beyond anything the Megadrive or SNES could have achieved.

Mind you, that’s a viewpoint three generations detached. At the time, a much younger FatNicK would probably have wanted a full 3d title that played much closer to something like Tenchu instead. Its easy to see how, when translating from Megadrive to Saturn, the Shinobi series was caught in a mismatch between the capabilities of the machine, the expectations of the audience and the direction the series realistically needed to travel in order to survive.

I’m getting ahead of myself here…what is the Saturn Shinobi anyway? Well, as its many names suggest, its an attempt by Sega to move their action-based platformer Shinobi into the 32 bit generation. Rather then take a dramatic step into the third dimension, Sega decided to take the familiar Shinobi gameplay and restyle it as  ‘photo-realistic’ title featuring digitized actors, environments that looked more realistic looking than their 16-bit forbears and fancy full motion video story sequences. 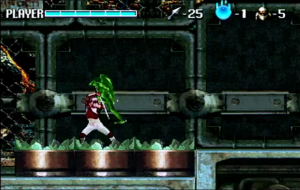 Thankfully, then, anyone who’s sampled any of the previous Shinobi games will feel at home here. Taking control of newcomer Sho, it’s the player’s job to get from one end of each stage to the other, aggressively cutting down any ninja, mutant or thing that stands in their path. Simple! What’s really different about the Saturn incarnation, however, is that the developers actively noticed and built upon a facet left largely unexploited in the original Shinobis: the sword.

You see, while all of the other Shinobi titles featured the sword, it was used largely as back up weapon that was brought out either  when it the player was close enough to strike a blow or (more worringly) had run out of Shurikens. On the Saturn, Sho’s Sword is very much its own weapon however. Not only is it unleashed with its very own button on the controller, but it has a variety of different swipe arcs and can even be used to block incoming blows and deflect projectiles back towards their source.

As game play alterations go, this was inspired. Though Sho controls in a similar manner and has a similar move set to previous Shinobi protagonists, as the extra sword moves grant both offensive and offensive options they offer dramatically new opportunities to even the most experienced and jaded of 16-bit Shinobi players.

I’m trying not to over egg things too far here, but i honestly think that, on its own, the simple yet revolutionary change the sword mechanics  would be enough to lead the Saturn Shinobi into the pantheon of the greats. Unfortunately, the sword wasn’t the only thing that changed between generations. 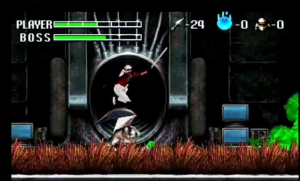 Indeed, one noticeable shift backwards with the Saturn Shinobi is the level design. Although the game starts strongly – The second level’s tree top climb is a particular favourite – what follows often feels less than inspired, with bio lab and labyrinth stages which feel as though they’ve been plucked more or less directly from Revenge and Shinobi 3.

With that said, if the game amounted to a ‘best of…’ compilation of previous Shinobi level designs that may not be such a bad thing. Unfortunately, the designs fall well short of this standard. For one thing, the pacing and difficulty seems wildly inconsistent. One level might have a number of overly-generous health regeneration pick ups, for example, while the next  may only have one towards the end.

Other sections are simply completely unfair. Around halfway through the game there’s a section which sees Sho leaping from mine cart to moving mine cart. Unfortunately, though the game gives you advice on when to jump, it gives you no clue as to the distance you have to jump and the mine carts are all at different heights and distances. The only way through it, realistically, is trial and error.

Another key element that seems to be toned down in the Saturn Shinobi are the boss battles. At a couple of set points in the Bio lab level,  Sho is attacked by a weird giant snake head thing that gives up after receiving a couple of good thwacks. Though this seems to be mimicking one of the impressive boss preliminaries from Shinobi 3, what actually stands before you near the end of the stage is a Sho-sized gargoyle that suffers from halitosis. Not massively impressive, that.

On top of this, some of the mechanics don’t work as well as in earlier Shinobi games. Though the designers were incredibly smart when it came to unlocking the potential of Sho’s sword, it seems they see to have tried to doubly increase the weapon’s effectiveness by nullifying the effectiveness of the traditional Shinobi shurikens. 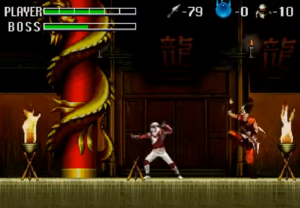 Slower and weaker than those found in previous Shinobi titles, you won’t really notice they’re gone if you try and survive by sword alone, which is a shame as, on top of the Shuriken issue, Sho doesn’t control as well as his forebear either. While Shinobi never had the snappy controls of a Sonic, the floaty jump and special move mechanics definitely let the Saturn Shinobi down.

As far as presentation go, there are a number of issues here as well. Though the photographic look may have seemed a good compromise at the time, it doesn’t really please anyone. At the time, players would have most likely preferred a fully 3d game to show off to their Playstation-owning chums, while today’s retrogamers would probably have looked much more fondly on a bolder fully hand-drawn art style.

Similarly, both of the games potential soundtracks have issues to. A quick go on the Japanese and US versions of the game will reveal why SoE wanted to rerecord: Not only are the melodies and harmonies a lot less memorable than  those found in previous Shinobi titles, but from a mid-90s perspective the sound is just as basic. Where Jacques’ European soundtrack is rich with natural-sound timbres recorded at a quality befitting the game’s CD-based storage medium, the sounds used in the original sound like cheaper versions produced by an FM-based sound ship.

Paradoxically, however, these cheaper sounds are the original soundtrack’s biggest strength. While Jaques’ soundtrack sounds a lot more expensive and is melodically closer to other Shinobi soundtracks, texturally it just feels off. The soundtracks produced for the Megadrive benefitted from having the naturally metallic quality imbued by FM modulation, which gave even the most peaceful and traditional tracks on the soundtrack a vaguely modern edge. Though Jaques Melodies are sufficiently ninjaesque, and his is definitely the sound track i’d prefer to listen to when out and about, his traditional-sounding textures often sound more suited to Tenchu’s medieval Japan instead of  the modern world of Shinobi.

Finally, much like the US soundtrack to Sonic CD, His soundtrack also suffers from being incomplete. As Sega of Europe neglected to rerecord the audio for the cut scenes, there is consequently a larger tonal mismatch between the content of cutscenes and gameplay in the European version of the title.

The Saturn Shinobi is a bit of a missed opportunity then. It’s not a terrible game – and its far from being the worst title in the Shinobi Series – but it is perhaps the most frustrating. While within its bounds are all the core ingredients for a classic experience on par with anything found on the megadrive, as it stands, it’s a middling example of what, in the mid ’90s, was a dying genre. Had Sega put a bit more into the game and had more faith in the concept, things could have been very different.