Considering that my creative output is entirely digital it might not surprise you to learn that, when it comes to building things in the physical world, I am not  a massively practical person. Physical clumsiness aside, I’m not really sure why this is the case. I know there are processes that one has to follow when making something, and I generally seem to be able to research and understand the processes required to make something, yet somehow when it comes to the actual making bit things inevitably go horribly wrong. Shelves come loose, screws won’t fit in, things shear off for no apparent reason. . . it’s not a pretty sight.

Indeed, secondary school electronics classes were a good example of this: Our teacher may have thought he was being cunning by offering us cheap and supposedly rugged breadboard to prototype our designs on, but he hadn’t banked on my unbridled destructive powers. Within about 15 minutes tiny component legs had accidentally been snapped inside the board and the whole thing had been rendered useless. Crickey.

Now, I apologise if this preamble seems a little indulgent, but it’s necessary to try and illustrate a very important point: If someone creates a kit that I can construct, then literally anyone (and I mean anyone,) can do it. I promise you this is not false modesty. There are few people in this world less practical than I.

The Haynes Electrosynth Kit, then, was an incredibly exciting and somewhat daunting kit to receive for Christmas this year. Having soldered just one a single lonely connection since my secondary school electronics days, I wasn’t sure if I would be up to the task.

The kit takes the form of a shiny reinforced cardboard box (which doubles as both packaging and your synthesiser’s body,) along with four tiny switches, two LEDs, a potentiometer, the main PCB brain, a loud speaker, some lengths of solder and wire and the all-important instructions that explain how to put the whole thing together. 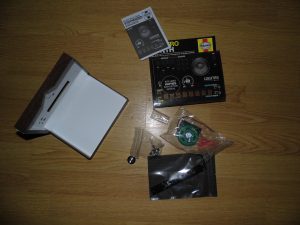 In the grand scheme of things it’s a pretty minimal set of components that hints at the beginner nature of the kit. That’s definitely not a bad thing mind you. As the hard bit ( the main chip and associated fiddly resistors) comes fully assembled,  the kit will probably take you about an hour to complete depending on how many challenges you run into along the way.

For a hobbyist just starting out, that’s pretty much perfect. There’s definitely enough work here to provide a mild challenge and help build your confidence, but you’re not going to run into anything that is too conceptually taxing. If you’ve never soldered anything before, you’ve got a reasonable chance of being able to solder this.

What’s it like to put together? Well, surprisingly the major stumbling block for me was the blasted box. Though its rugged nature makes for a surprisingly durable body, that isn’t such a great characteristic when you have to recut the holes in the exterior because they don’t align with the positions of the components on the board.

I don’t know if that’s a common flaw or just a single bad kit, but it wasn’t a massive problem in the end: a  few clumsy incisions with a stanley knife proved to be a functional, if somewhat untidy, solution. There also wasn’t any blood, thankfully. 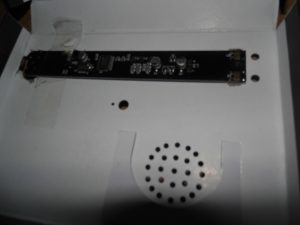 Having overcome the box the rest was surprisingly easy to put together. Not only are the instructions written in plain, helpful english, but the soldering (which was the part which had worried me the most,) was really straight forward. As if created with me in mind, the pads on the board are surprisingly big and chunky, so even the clumsiest solderer stands a chance of getting the job done. Throughout the entire build, there was only one fire – and that was only very small.

Fire extinguishing aside, the only vaguely tricky part of the whole process was adding the potentiometer – and that’s only because the connections have to be out of order (1,2,3 on the switch but 1,3,2 on the board.) As long as you measure the length of wire needed you should be fine. 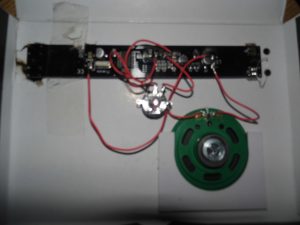 So when it’s all put together, what do you end up with? Well unfortunately the printed design of the case (with its multiple switches and dials) over-eggs the pudding somewhat, as the final article is a bit of a simple affair.

In fact, aside from the volume switch and exposed metal “keys” at the bottom, the device only had 4 controls. The two switches you will have soldered onto the left side of the device help you move between natural notes, flats and octave-transpositions. 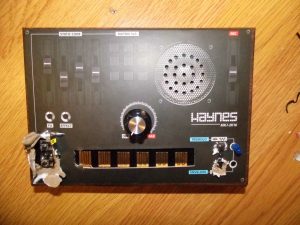 What does it sound like? Again, the promotional material – which asks you if you like your “leagues human” and your “mondays blue”  – is pushing it slightly (it’s more your “Krafts Werking,” if anything.) Rather than an expensive synthesizer, the simple sound waves it kicks out sounds closer to the sound generator from an 8-bit computer though again, due to the lack of controls, don’t expect to be recreating your favourite Zx Spectrum or C64 masterpieces here.

Overall then, the quality of this kit really depends at what you want out of it. If you already have some experience of putting together electronics and want to build a “real” synthesizer, this kit probably is much to basic for your needs (It might have some capacity for circuit bending, but i’m afraid commenting on such matters is  very much beyond my expertise.)

However, if you’re looking to get into electronics and want to build something a bit more complex and impressive than a switch connected to a lightbulb, this kit might be the thing for you. The end product might be closer to a toy than usable musical instrument, but I definitely had a lot of fun putting mine together and the experience had definitely left me interested in having a go at building their radio and Pong  clones as well. Take that as you will.