Thursday was a truly magnificent day: Completely out of the blue, Sega made a ton of their soundtrack albums available on Spotify. Blimey!

The only problem with having access to such a large collection is the question of where to start. As I have a feeling people will stick to what they know and make a beeline for the Sonics and Jet Set Radios, here are three understated sound tracks I think are worth your time: 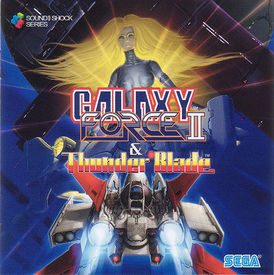 This album gives you two soundtracks for the price of one! Who could argue with that? Even better, they’re two interesting and relatively complimentary soundtracks too boot.

Galaxy Force is a title you may have seen me write about before. Released in 1988, the game is a highly ambitious rail-shooter that sees the player pilot a spaceship through a number of different intergalactic environments in order to fly into – and destroy – a number of secret bases controlled by a typically evil space empire.

Those expecting a generic “cinematic” or rock-tinged soundtrack may be in for a surprise, however, as the sound track is a full-on Jazz Funk affair. From both a music and technical perspective, this was an inspired choice. On the technical side, the jazz and space themes combined to allow the composer’s to get the most out of Sega’s FM-based sound hardware.

Though normal FM brass sounds can sound a bit “farty”, the sparkling lead sounds and jumpy metallic slap basses are the kind of instruments that sounded better on no other sound hardware at the time.

Of course, technical interest means nothing if the soundtrack doesn’t deliver musically, but it excels here too. Using spacious arrangements evocative of the cosmos, the tracks keep you grounded in the tense action with tight, jittery rhythm sections. Most of the melodies aren’t as instantly appealing as, say, Green Hill zone but they are definitely memorable. It’s a very clever soundtrack.

I won’t pretend that I don’t think that Thunder Blade is the weaker of two soundtracks, but it definitely isn’t without its merits. Though it’s another jazz themed score, this does have the advantage of meaning it pairs well with Galaxy Force.

Indeed, despite being the work of different composers, the two soundtracks share a surprisingly simar feel – not least because they both feature bold airy  arrangements built on top of tight, jittery rhythm sections.  This definitely speaks volumes about how successful Sega were at establishing a house style among their composers.

Why is Thunderblade the weaker of the two? Mostly, I think, it’s down to the melodies. On a purely technical level I find it just as enjoyable as Galaxy Force, however the tracks fail to build to as many satisfying crescendos and the individual tracts aren’t quite as memorable.

Still, as an album, the two soundtracks go together well and you get a lot of bang for your buck: Along with the original arcade soundtracks, the album also contains the FM soundtrack for the unreleased Japanese version of Galaxy Force along with modern arrangements of key tracks from both titles. Hurrah! 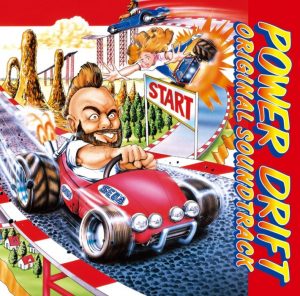 Powerdrift, the game, is an interesting and often overlooked highlight from Sega’s intimidating pantheon of arcade racing games. Originally ported to everything from the Zx Spectrum to the Amiga by third parties, the racer was largely overlooked by Sega themselves, who only saw fit the game retrospectively on the Saturn and Dreamcast – and then only in Japan.

This was a major shame, because it’s an amazing title to play. Utilising go-karts before Mario made it cool to so, Powerdrift sees the player racing a batch of colourful opponents across an imaginative variety of raised rollercoaster-like tracks.

The game is a blast to play – and that’s not least because of it’s incredible soundtrack. If Galaxy Force and Thunder late were a bit to jazzy for you, Powerdrift will give you more of the rocky fix you’re probably craving. Though the crunchy, “midi”-sounding guitars lack some of the technical finesse found in other Sega soundtracks of the era, the pounding rhythm section parts and catchy melodies on tracks like “Like The Wind” more than make up for it.

That’s not to say its monothematic, mind you. Though Hiroshi Kawaguchi’s score definitely has a harder edge than the one he composed more famously for Outrun, there’s lots of interplay with more overtly electronic textures, making for a nicely balanced soundtrack that should hold your interest.

Oh, on top of that, you don’t have to make do with just the original arcade tracks either, as this soundtrack also includes the “live” arranged versions included on the Saturn retro release. Good value for money, that. 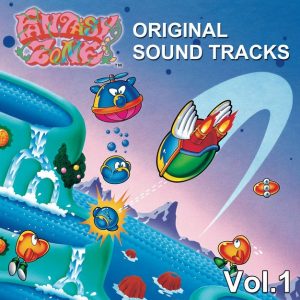 Considering the aim of the game is essentially to destroy all of your foes before they manage to leave their homes, I have always been slightly worried that Fantasy Zone might be a military atrocity hidden beneath a cute and cuddly exterior.

No matter really, as there are few scores that pull off synergy between soundtrack and gameplay as well as Hiroshi Kawaguchi’s work on Fantasy Zone.

Yes, the sound quality of FM sound chips might well be written off as “farty” by some, but here that quality is used to strategic effect: Just as the overwhelming cuteness of Fantasy Zone’s visuals obscures the titles hardcore shooter roots, so the gentle “oom pah pahs” of the basslines serve to dispel tension and keep the mood light and bouncy.

Not that you need the visuals to enjoy the soundtrack, mind you. Light-hearted this largely Samba-inspired soundtrack may be, but there are enough catchy melodies, toe-tappable beats and surprising twists and turns to keep even the most discerning soundtrack fan interested. The surprisingly menacing boss theme, for example, is a joy to behold.

A word of warning, though: Where the other soundtracks we’ve looked at included a few cool bonuses, the Fantasy Zone soundtrack is a bit more. . .thorough. Spread across three volumes, it include soundtracks from multiple Fantasy Zone games and some strange oddities such as the Opa Opa-themed crowd chant from Virtua Striker 4.

Overall then Fantasy Zone is pretty fantastic. If you want to soundtrack your entire day with Samba-style grooves, you could definitely do a lot worse.