Oh look! Rock Paper Shotgun have posted a focused (though short and somewhat incomplete) look at one of my favourite PC classics of all time, Midwinter 2: Flames of Freedom. You can read it if you want. I’ll wait.

To be fair to it, I think the above article nails the core gameplay of Flames of Freedom pretty well. If it weren’t for the crude low-polygon graphics, it would be difficult to believe Flames of Freedom was a game from the early 1990s: Granting the player complete freedom to explore an archipelago of large tropical islands; Flames of Freedom included pretty much all of the features you’d expect from a modern open world game (such as hijackable vehicles) and even some you wouldn’t (like the ability to destroy every building in the game.)

These factors alone would be enough to make Flames a curiosity that’s worthy of investigation today, but the truth is that focusing on the free roaming aspect is only scratching the surface of what makes Flames a fantastic game.

Cruisin in a bi plane

You see, at its’ heart, Flames is actually a pretty robust strategy game. The player’s overall goal is pretty straight forward: Working as a secret agent for the good guys based on the isle of Agora, its up to the player to free as many of Agora’s occupied neighbours as possible before the naughty Saharan empire are able to send an armada to crush Agora’s resistance for good (For those who want to get into the full backstory, there’s plenty of it – the manual was one of those gloriously huge, spiral-bound affairs.)

Naturally, the task is slightly more complicated than it would appear on the surface. With just 6 months until the armada launches, there isn’t enough time to liberate every island manually. Though the player can liberate chains of islands by isolating their communication and trade routes from the mainland, individual islands offer varying levels of resistance and will take different amounts of time to liberate. Consequently, extracting the maximum effect for the amount of time the player invests is a careful balancing act.

There’s a lot to keep track of, but thankfully the mapscreen helps a lot here

Having selected an island to liberate, the player is then dropped onto into the three dimensional game world with a list of objectives to complete. The need for carefully considered strategy carries over to here too, mind you.

You see, In the Rock Paper Shotgun article, Adam Smith says he never knew what he was supposed to be doing, but this is perhaps a little unfair. Before departing for a mission, the player is provided with a full briefing that contains the objectives they need to meet, the equipment they will be provided with and some preliminary contacts who can provide aid and information. If you miss it, all of this information is available from the map and objective screens which can be accessed from any time.

No, Flames of Freedom isn’t tricky because of what the player has to do, the trickiness stems from just how the player goes about doing it. Though the game gives you some rudimentary tools to help you navigate (such as the ability to drop waypoints on the map and fast travel between them) there’s none of the hand-holding we’ve come to expect from modern open worlds. It’s up to the player to discover the exact location of their objectives for themselves and acquire any special tools they need to do the job.

This might sound daunting, but the flip side of this open nature is the scope for player improvisation. If you can’t find a contact who can provide you with the explosives needed to level an enemy  propaganda station, for example, the player can just as demolish it with a hijacked tank instead.

Tanks for the memory!

Consequently, this freedom isn’t quite as daunting as it first appears, and as long as the player is methodical about exploiting their contacts (and their contacts contacts,) and paying attention to local geography, they’ll soon have the knowledge, weapons and forged identity papers they need to succeed.

A spy game wouldn’t be a spy game without some double-crossing mind you, so the player should move with care: not only do some individuals set red herring conditions that are mutually exclusive with your own (they’ll ask you to kill someone whom it is your mission to enlist, for example) but befriending the wrong person can end with you stuck in a prison run by the secret police, marooned in a cell until you can craft a cunning plan to escape.

Be careful who you trust…

Flames of Freedom was a game massively ahead of its time then, but that doesn’t come without its drawbacks. One big problem is the ability to only choose a single input method. There’s a reason people don’t try to drive cars with computer mice or use a joystick to operate Microsoft Word, and the eclectic mix of action and strategy found in Flames inevitably means that no single control option is capable of meeting all of the player’s needs comfortably.

Some may also be put off by the game’s pacing as well. Though on paper hijacking an airship in order to blow up an enemy powerstation sounds like something out of a James Bond film, the relatively sluggish nature of the game engine means that Flames often feels more at the Le Carre end of the spectrum. Control is also a tad on the imprecise side. Though its commendable that a hot air balloon handles differently from a bus, I suspect that the reason so many vehicles in Flames’ world are equipped with homing missiles is because the imprecise controls render manual aiming a bit of a chore. 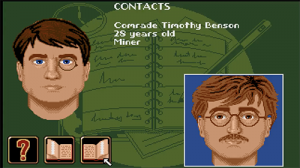 The objectives you’re set are simple. Completing them, on the other hand…

Still, backed by fantastic incidental music composed by Uncle Art (the game’s theme is featured on his Temproal Shift collection) and blessed with unshaded polygon-based graphics that retain a charm found lacking in the texture-mapped titles that followed them, there’s still much to love about Flames of Freedom. for me, it definitely remains a title that’s worthy of your time. In a world which has had its appetite for innovative open world games restored by Nintendo’s Breath of the Wild, Microprose’s spy thriller is an early example of a title that managed to create a compelling open world without having to rely on time trials, fetch quests or hundreds of hidden collectibles.