List posts, eh? If there’s a more cynical way of generating content than selecting a random topic from the news and assembling an assortment of ten things that are only vaguely connected to it, I certainly can’t think of one.

On the other hand .  .  . they’re good for clicks aren’t they? so here is a list of ten Sega games that I hope will be a part of Sega’s new Sega Forever initiative, but fear probably won’t:

Released all the way back in 1983, Pacar’s title is a bitter swipe at the similarities between Namco’s culture-defining super-smash Pacman and Pacar’s immediate predecessor, the relatively unknown Sega arcade game Head On.

More of a Pacman clone than  true sequel to Head On, Pacar is a more interesting maze game than a title born out of spite deserves to be. Though the player still has to explore networks of corridors with the aim of avoiding baddies ad eating ( sorry. . . “deleting” ) any and every dot they find, Pacar has a quirk that makes it stand out from the crowd: Instead of exploring mazes as a cartoony character, your player is a cartoony car instead.

The vehicular nature of your character has a major impact on how the game plays. I’n particular, the player is unable to turn on the spot as they can in other Pacman clone, and instead has to poodle along in a painfully slow reverse gear until they’re in a position to make a turn in the road. This driving mechanic, combined with map design that encompasses both tight maze like corridors and speed-friendly open areas, make this an individual maze game that’s easily worthy of your time.

Chances of this one finding its way onto your Android? Negligible I reckon. If there are going to be any SG-1000 releases, I imagine this one will be way down the pecking order. Or behind the likes of Girl’s Garden, at the very least. 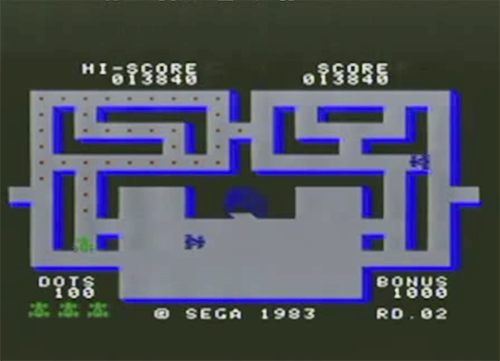 Sadly, Sega have been doing a fine job of completely ignoring their arcade heritage in recent years  – and Sega Forever looks to be a continuation of this trend. Mind you, if Sega had a change of heart and DID want to acknowledge the legacy of the coin-operated machines they produced, a sneaky way of doing it could be to port the Saturn Sega Ages collection.

Combining three of Yu Suzuki’s finest 80’s hits (Afterburner, Outrun and Space Harrier,) the Sega Ages versions of these iconic games took full advantage of the Saturn’s 32 bits of power to give people the arcade-perfect home ports they had wanted since the mid eighties. There isn’t much more to say than that really: Three iconic games, one free release. You couldn’t get better than that, could you? (well, aside from a complete Sega arcade collection of course *mumblemumblemumble* )

Chances of this one turning up? Probably negligible. The Saturn isn’t the easiest machine to emulate to begin with, so they might be better off just going back to the original games. 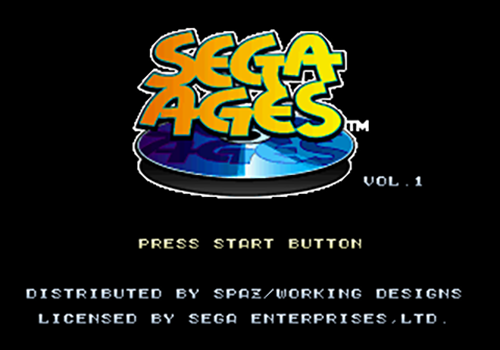 Not to be confused with the more realistic Super Monaco series, Monaco GP on the SG-1000 was a port of an ancient (and CPU-less), Sega arcade game that saw the player drive a car along an endless stretch of road.

Ancient the game may have been, but the home port delivered gameplay in spades. Merging nippy handling with a decent variety of challenges and obstacles, Monaco GP is the kind of addictive score-chaser that’s almost impossible to put down – and incredibly well suited to play on the move as well.

Chances of this one driving over the horizon? Actually I’m more hopeful than most. After Girl’s Garden this is one of the more well-known SG-1000 games. If Sega are serious about the Forever initiative supporting all generations of Sega consoles, this might well be one we see. 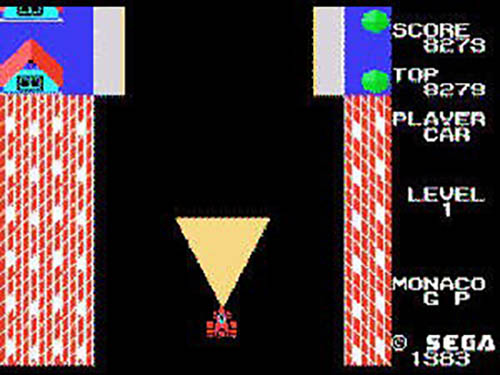 Though it’s 16-bit sequel/remake is almost a certain shoo-in for a Sega Forever release at some point, the Master System ESWAT is a a completely different game. Though the game is built around the same basic plot as the 16-bit version – a decorated beat cop is gifted a super-powered metal suit for some all-round shooty fun times – the Master System port stuck closer to the original linear level designs of the arcade game and ended up as a more focussed, intense shooter because of it (Even if it does seem a tad similar to a certain licensed Data East arcade title.

Chances of seeing it? Probably not. As one of the Master System titles that only saw the light of day in PAL regions and Brazil, I’m guessing it will be languishing far at the bottom of any priority list held at Sega HQ. 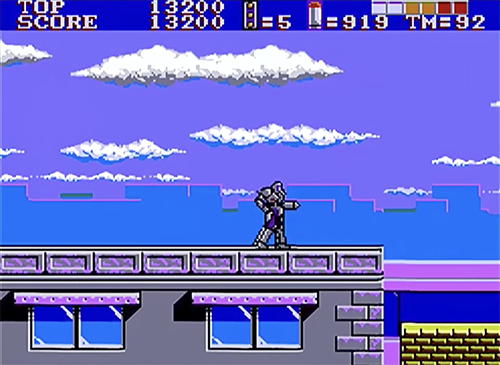 Speaking of super-powered suits, here’s a good title for anyone who thought Nintendo consoles had the monopoly on weird J-RPGS. Rent A Hero Follows the exploits of a teenager who accidentally enrols as a super-powered “Rent A Hero” while trying to order some food from a local take away, and manages to be a surprising game for more reasons than its outlandish plot.

Sporting a combat system that focussed on Street Fighter-style brawling rather than turn-based shenanigans and a game structure that focused more on problem and puzzle solving than exploration and grinding,  Rent A Hero remains a fascinating and visionary RPG marred only by a severely limited palette of audio-visual assets.

Chances of it punching onto your tablet? It’s an interesting one. As it was designed by Yu Suzuki, this could be a cheeky way of jumping on the Shenmue 3 bandwagon in a few months time. It was never released outside of Japan however, so i’m guessing translation costs would scupper this one’s chances of seeing the light of day (though a thorough fan translation does exist . . .) 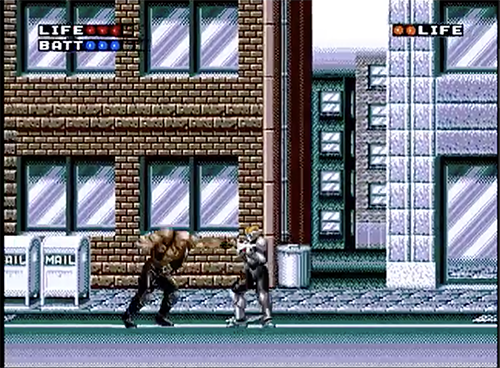 Here’s one we’ve looked at before. Starting out with a solid flight-based arcade shooter, the Master System version of G-LOC added RPG-style progression and some epic boss battles to make for what is probably the best version of the game across any system (if you can look past the more basic visuals, that is.)

Chances of it being released? As with E-SWAT,  G-LOC (hey, what’s with the hyphens?) was another Master system game that only saw the light of day in Europe and Brazil. Bah. 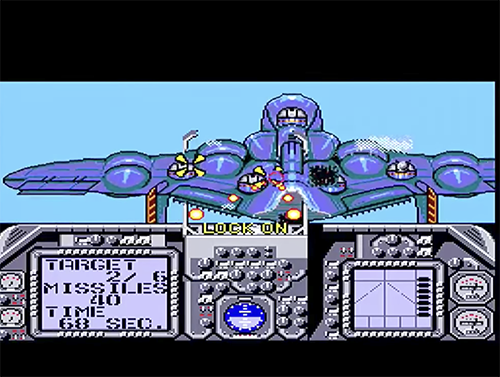 If Sega Forever is to be a celebration of all things Sega, how could they resist converting an RPG about saving the company? Released in the dying days of the Dreamcast, Segagaga is unusual RPG/business simulator that focuses on a fictional near-future market war between Sega and a company called Dogma. Aside from the ability to attack Sega characters with a Sega-branded UFO capture attacker, that’s as much as I know I’m afraid – the lack of english translation means I’ve never played it. Boo.

Chances of it being released? None I reckon. Though there’s a hardcore tranche of Sega fans (me included) that would love to play a naturalised version, I’d imagine that translation costs would make this an economic non-starter. 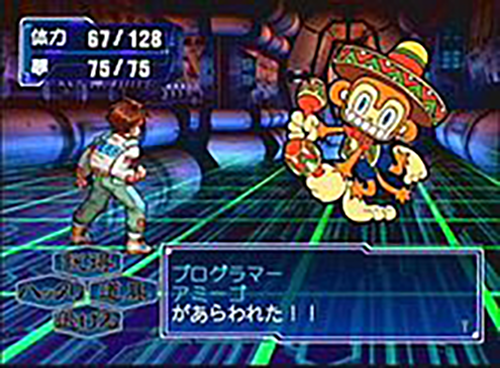 Almost a decade before Afterburner Climax showed the world what a modern update of an 80’s rail shooter should look like, Sky Target was Sega’s first attempt at making a fully three dimensional Afterburner game. Though Sky Target featured action that was somewhat slower than what was to come both before and after, the inclusion of branching level paths, epic boss encounters and a choice of player aircraft more than makes up for it. Add in some of that magical mid-90s Sega level and sound design and you have a game that is decidedly mobile-ready.

Chances of it seeing the light of day? it depends on how serious Sega are about Saturn emulation. Considering that previous ports of Sega’s Saturn and Dreamcast titles have generally relied upon existing PC versions, the fact that Sky Target was a Saturn/arcade exclusive might place it out of the running. Especially since there is a perfectly serviceable PC port of rival rail-gunner Panzer Dragoon. 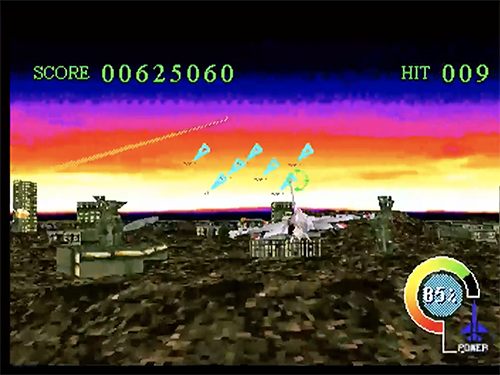 Released by Sonic Team in the Saturn’s dying days, Burning Rangers was a fitting swan song for the console. Produced by Sonic creator Yuji Naka, Burning Rangers focuses on a team of futuristic fire fighters and consequently has the unusual goal of saving – rather than shooting – people. Sporting animated sequences created by the chaps behind Akira and a novel voice-driven navigation system, Burning Rangers was well received at the time and deserves to be seen by a wider audience. Its relatively slow control style would be well suited to a touch screen and  even the main criticism targeted at game originally – that it was a bit too short for its own good – would be a further string added to its bow.

Chances of fighting fires on your iPhone? As with Sky Target, Saturn exclusivity might be an issue. The visual effects used in Burning Rangers pushed the Saturn to its max, so Sega would need to make sure their Saturn emulation was fully up to scratch before they tried to port it. 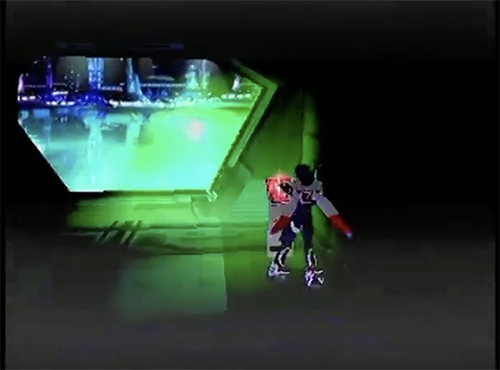 Developed by Sega’s resident hitmakers AM2, Propeller Arena was going to be a bold online dogfighting simulator. Unfortunately, fate intervened: though the game was finished, The Dreamcast’s faltering market share had the game’s release resting on a knife edge. When the 9/11 terror attacks occurred shortly before the game was to hit the market, the title was consigned to the scrap heap for good.

Though politically this decision may have made sense in the short term, it’s a great shame this title hasn’t subsequently seen the light of day. Disk images of the finalised game have subsequently leaked online, and those who’ve played it have mostly provided  positive feedback. On top of that, it’s casual style would be absolutely perfect for mobile play –  especially since online-optimised world Sega were planning for back in 2001 has become a reality.

Chances of it flying onto your iPad? This is an interesting one. Though it’s not a game Sega have shown any real interest in,  I wonder if Sega would consider revisiting it in light of the excitement surrounding the inclusion of Star Fox 2 on Nintendo’s SNES mini? As far as emulation goes, the DC is a lot easier to handle than the Saturn, so we really will have to wait and see on this one. 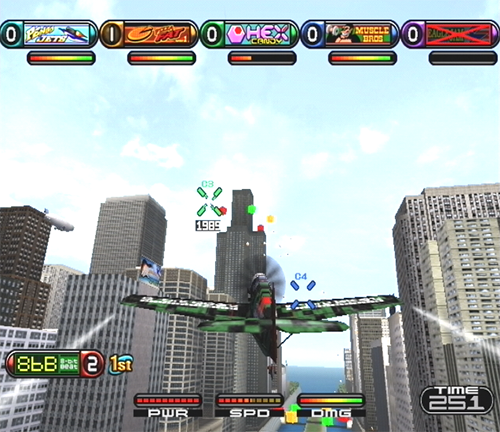 So that’s the list! I hope you liked it. This is now the bit where i tell you to share and leave comments, so could you please share this and leave a comment about how awesome Pacar is?