Generally I try and keep things positive on Review a Bad Game Day. After all, while a game can be bad overall, it can still have individual elements that are fun or noteworthy or just generally interesting. It’s very rare to find a game with no redeeming qualities whatsoever.

Dark castle on the Megadrive is a game, i think, with no redeeming qualities whatsoever. Originally released to some acclaim on the Macintosh, i’m not quite sure what went wrong with the Megadrive port.

The basic premise, after all, is one with a lot of promise. “Metroidvania” before the term existed, Dark Castle sees the player take on the role of a prince tasked with searching the many maze-like rooms of a two dimensional castle in order to find and stop the evil Black Knight. 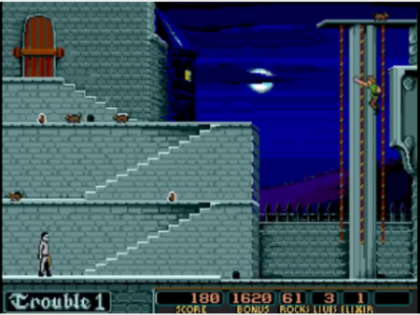 With multiple routes through the castle,optional upgrades to find and the ability to go forth and challenge the Black Knight at any time, Dark Castle has all of the ingredients of a tremendously enjoyable action adventure. Indeed, just describing the individual elements has made me want to play it again. That wasn’t supposed to happen!

So  wait, if Dark Castle can be so appealing in synopsis form, how can the final product be so terribly woeful? Perhaps we should start with the most forgivable faults, and work our way down. To begin, there’s the graphics. As with a lot of early Megadrive games, these aren’t great. Not only do the sprites (understandably) look more like enhanced 8-bit designs rather than Megadrive-based originals, but the game world is colourised in a bland and unappealing spectrum.

Personally I’m not massively fussed about this. It did originate on the 8-bit machines after all, so perhaps this was to be expected. Much less forgivable is the audio side of things: though Bach’s Toccata and Fugue in D minor is a jolly enough choice of track to underscore the action (that’s the Dracula organ music to you and me,) the game features only a short passage from the work’s most icon section played on an endless loop. 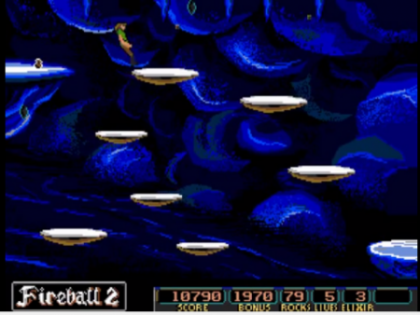 Consequently, if you have any sort of play the game for any length of time, you could end up hearing this loop 30-40 times. This is a shame as, while it is a good arrangement (the metallic rasp to the organ is a really good demonstration of what FM can do) the repetition becomes irritating to the point of wanting to drink the blood of the living. Or of the developers, at the very least.

Graphics can be ignored and and sound muted of course, so inevitably the real issues with Dark Castle lay with the core gameplay mechanics themselves.

One of the most annoying aspects of Dark Castle is one of it’s most original features: an arm rotation button. This button is the key to controlling two of the main tasks you’ll need to undertake to survive the castle: You will need it positioned correctly in order to throw rocks at any adversaries you meet along the way, and you will also need to use it to ensure your hand is in the correct position to grab the vines and ropes you will need to make use of to navigate a number of platform based puzzles.

In theory there is nothing wrong with this, but the implementation leaves something to be desired: as you are forced to cycle through your arm’s 8 clock-face like positions, progress through the game’s more complex puzzles becomes a chore. Though you should be able to leap from a vine straight into an attack on an enemy,the cumbersome combination of moves required to pull off what should be a basic manoeuvre renders such a combination obsolete.

The hand issue is compounded when you consider the stakes involved, as another problem with Dark Castle is the jumping itself. Not only are the controls sniff and unnatural (This is not a title that sits well alongside the likes of Flashback and Another world) but the smallest fall is enough to temporarily incapacitate, if not outright kill, our hero. This makes it next to impossible tackle any of the rooms with any sort of fluidity and pace.

This hamstringing of the games momentum would probably be a problem on its own, but it comes packaged with an equally annoying winged friend: if you take too long to traverse any individual screen, a surprisingly tiny griffon flies across the screen with the aim of scooping you up and depositing you in one of the dungeon screens.

This is incredibly annoying. The griffon flies swiftly and can only be deterred once you’ve found the fireball upgrade. Consequently, for most of the game, the only sure-fire way to get rid of him is to leave and then reenter the screen, which feels a bit silly and artificial. 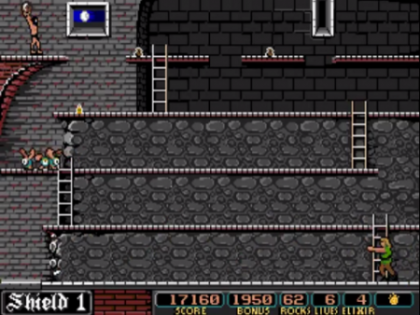 So the pace is clunky and slow and the arrival of the griffon does the game no favours, but what of the actual exploration? Well, this too also feels like a disappointment. Every new game begins in a central hub, with 5 exit door ways. Effectively, each door way represents a route to a different artefact (aside from one which very clearly leads to the black knight himself) so it’s not exactly a game that would have had you breaking out the graph paper in order to create maps.

This more linear nature could perhaps be forgiven if there individual screens and puzzles we up to much, but to be honest with you the screens that don’t overly rely on irritating bats and overly-small platforms generally have mechanics stolen from other games.

Perhaps the best example of this is the (spoiler alert!) final battle with the Black Knight himself. Ànyone expecting a dramatic sword fight or joust will be extremely disappointed: the Black Knight sits stationary in the middle of the screen, and is up to the player to send him crashing to the ground by destroying the supports holding up his throne. 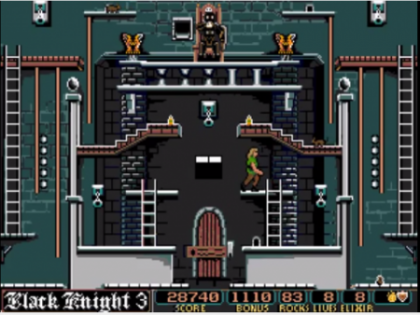 If that doesn’t sound weird enough, the only attack the Black Knight has is to halfheartedly chuck empty dining v vessels your way. The whole think feels very weird – its like the designers are telling you they can’t be bothered to finish it properly, so you’ll have to settle from the second screen from Donkey Kong instead. It’s very strange and anti-climactic, though is perhaps the perfecting ending to a game that should be much more than it was.

Now at this point it would be easy to throw Dark Castle a life line and remind everyone again of its 8-bit roots. The problem, however, is that EA released a number of ports that transformed clunky outmoded computer titles into 16-bit ready smashes. Starflight, for example, was another 1991 port of of a clunky 1986 original and featured redesigned artwork, a refined musical experienced AND slightly reworked gameplay mechanics that masked the simple tile-based origins of the original. In other words, its everything that Dark Castle could have been, but wasn’t.

Consequently, the Megadrive port of Dark Castle is a very difficult game to say anything nice about, really. It has a reputation for being difficult, but this is based purely on having poorly formed mechanics rather than anything else. Sticking with it is more a measurement of your pain threshold more than anything else. On top of that, it’s a difficult to weave it into any kind of historical narrative. It’s not really a notable title in the development of the system, the publisher or in the history of ports in general. This verdict, then, has to be that you should probably go and play the original or just simply pick a different game entirely. There isn’t really anything to see here.