Sorry i haven’t been as active around here lately, but until everything’s back to normal here’s a nice tid bit brought to my attention by Ocean veteran Mark Jones (who’s well worth a follow if you’re interested in Spectrum art stuff.)

Now, if you’re into old videogames you’ve probably tried visiting a few charity shops in your time – and probably been presented with a few common and uninteresting PS2 titles for your trouble.

Well, a good few years ago the editor of Retrogamer fanzine was hunting in a charity shop and, on discovering a box of tapes, got a bit more than he bargained for:

I sorted through the box selecting the things I wanted, when towards the bottom was an inlay cover not in its box. I turned it over and it’s safe to say it blew my mind. It said Attack of the Mutant Zombie Flesh Eating Chickens From Mars. I immediately recognised it as Matthew Smith’s long lost game. I have always been a big fan of his and recalled the cover from the advert I have in Crash magazine (June 1987 edition, page 101 if you want to look it up). The cover is the size of a two cassette box. The front is the title made up from various characters to illustrate the words (I particularly like the letter K in attack, it’s terrified!). The red circle on the top right reads, “A new game from MATTHEW SMITH author of MANIC MINER & JET SET WILLY”. The inner facing section has the scenario in text only. The back cover has some more text and new cartoon graphics of the characters. The spine reads “Zappo the Dog” and has the Software Projects logo. When it’s folded out the flip side has the scenario in French, German and Spanish.

So there we have it. Rather than a battered copy of FIFA or Need For Speed: Underground, Keith Ainsworth had accidently stumbled across one of the holy grails of the ZX Spectrum library.

Whether its a mock-up or pre-production proof no one knows. At any rate there’s never been a trace of the cassette that may or may not have come with it. Bah humbug.

The full text of the discovery and the original images of the inlay an be found here – do give it a look!

As the original website that hosted these is currently only still up because of a geocities mirror, i’m hosting them here for your delectation. Enjoy! 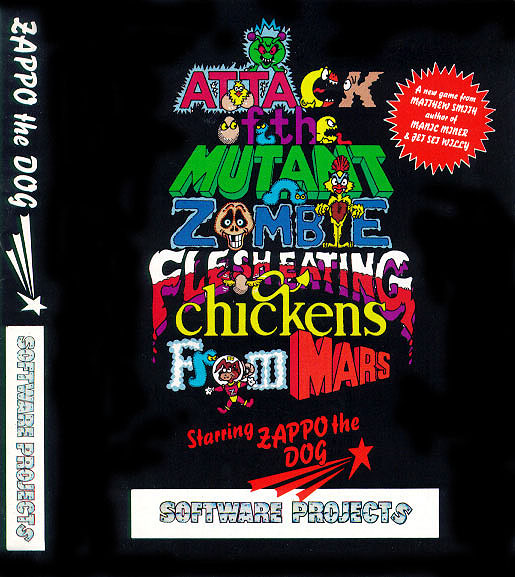 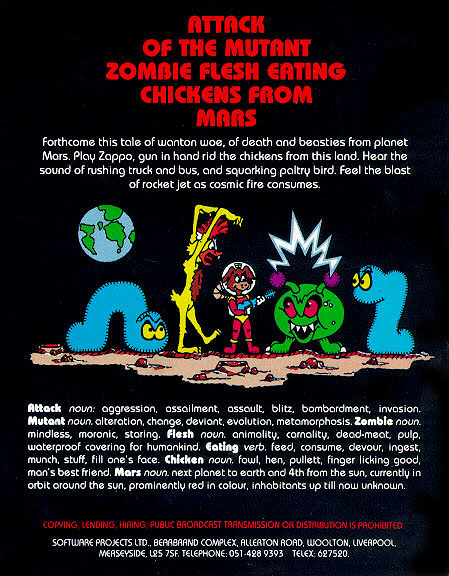 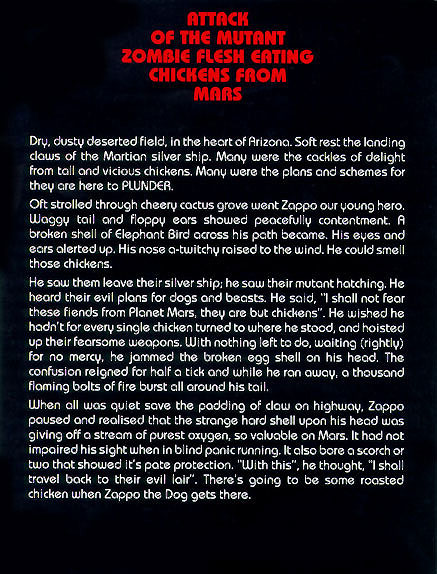