So after a tremendous amount of build up, Sonic Mania has finally been released. The first “proper” Sonic game in over 20 years, this should naturally be right up every aged Sonic fan’s alley. I can’t say I’m quite as enamoured as everyone else seems to be, however.

That isn’t to say that Sonic Mania is a bad game by any stretch of the imagination. In fact, there are many, many things to praise about it. Sonic’s mechanics are so close to his 16-bit predecessors you have to try very hard to remind yourself that this is a completely new game rather than some form of emulation. The graphics effortlessly improve on the look of the 16-originals, but in an incredibly natural way that makes it difficult to remember that the blue hedgehog’s world has ever looked different. The remixes of classic Sonic tracks have been tastefully done, while the new tracks sound like they could have been pulled straight from a contemporary sequel to Sonic CD.

That’s not all either: The easter eggs – of which there are many – pull some great material from a number of obscure games from the backlist, and the new boss battles and hidden special stages show a masterful understanding of how Sonic games were constructed thematically and mechanically. It should be stressed, then that Sonic Mania is, at its heart, a good game. 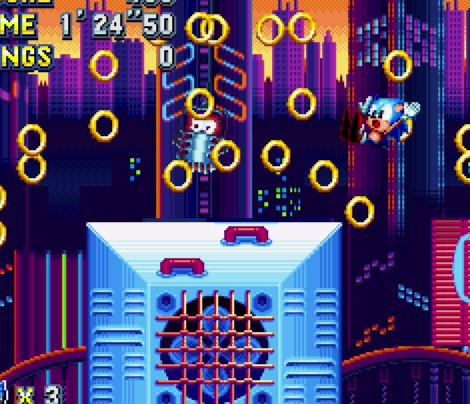 So if it’s that good, what’s the problem? Sadly, when it comes to level design, Sonic Mania seems to have an ignorance of the crucial communicative bond between the player and designer that is crucial for a Sonic game to function to its fullest.

When the classic Sonic games are mentioned, much is inevitably made about Sonic’s speed. Though speed is definitely an important part of the character’s backstory, its role in the gameplay was never as large as you would think. Yes, Sonic builds up a tremendous amount of speed in strategically placed ramps and set pieces, but his default running speed wasn’t really that much higher than many other platform stars of the era, and it alone certainly wasn’t different enough to extricate the hedgehog from the mire of barely-memorable 90’s platform heroes.

No, what really made the classic Sonic games stand out was the level design. More specifically, the feeling of pure, unmitigated freedom offered by the expansive multi-tier, multi-axis level designs. No longer did charging off a cliff result in the instant death found in other platform games: more often than not, it revealed a spring and an alternate path leading off in a completely different direction.

The ambitious nature of Sonic’s level designs, however, offered just as much challenge for the level designer as they did freedom for the player. The strict rules of an original Super Mario level might have been limiting, but they offered instinctive clarity – Within seconds of starting the player knows exactly what aspects of the game world will help and hinder them as they make their way towards their goal.

Bringing that same clarity to the chaotic world of Sega’s mascot seems like it should have been a pretty tall order, but it was a skill that Sonic Team seemed to have an instinctive mastery of. From the abrupt way vertical scrolling stopped as the player neared a deadly fall, through to the tame ways badniks and crush traps were introduced so as to warn the player of their mechanics, it quickly becomes clear that Sonic levels are effectively a dialogue between designer and player – with the former repeatedly offering hints and warnings that allow the latter to make brisk progress without needing fear death at the hands of unforeseeable perils. 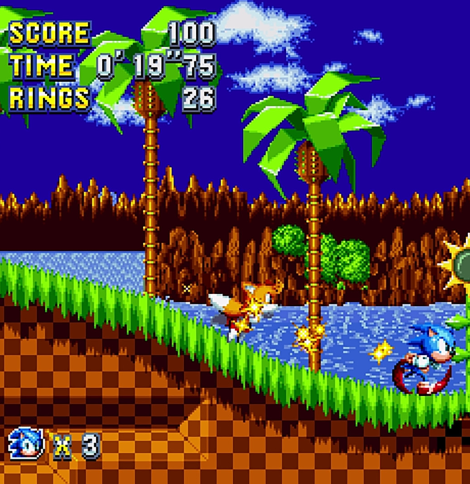 Sonic Mania’s biggest flaw is that this dialogue is relatively mute: New mechanics and villains are introduced in ways that feel designed to trick rather than inform the player, while crush traps and surprise fall deaths are used more liberally and without the subtle warnings so regularly embedded into the level designs of the earlier games in the series.

Perhaps the best example of this is one particular boss – which i won’t outline too much for risk of spoiling – that has an insta-kill death baked into its attacks. It’s trivial to avoid once it’s robbed you of a life, but its the kind of cheap trick that wouldn’t have a place in Sonics of old. That’s not to say that there isn’t a tremendous amount of good level design in Sonic Mania too, but it’s let down all too frequently by unforeseeable deaths that seem designed to force you to take the game at a sluggish pace unbecoming of a Sonic game.

This is a real shame, because otherwise the nuts and bolts that make up Mania’s levels work tremendously well. From the twisting rollercoaster tracks through to the optimum amount of momentum offered by each type of spring, the Mania team clearly have a complete understanding of how all of the individual mechanics that make a Sonic game work. Nowhere is this truer than in the game mechanics they’ve invented for themselves in fact, which generally borrow a familiar theme from the classic sonic world and add a layer of novelty that makes it seem new and exciting. 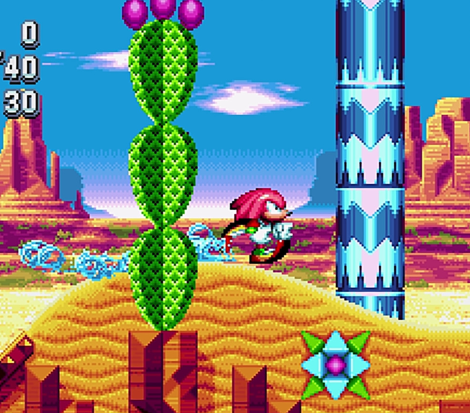 Much like a Sonic 2 special stage that’s been failed at the final goal, Mania unfortunately comes tantalisingly close to reclaiming the true glory of the 16-bit Sonics, yet the small gap that remains is effectively an impassible chasm. I know that gripes about level design seem like relatively minor ones, but a play through of Mania reveals what an absolutely vital factor it is in separating the likes of Sonic the Hedgehog from the likes of Bubsy the Bobcat.

With that said, Sonic Mania is definitely a game i can recommend. Though a lot more frustrating in places than it needs to be, there’s still a lot to like about it. What’s more, even the most experienced Sonic fan might find themselves thinking about aspects of classic Sonic game design that they’ve never given much conscious thought before. As a tribute to a classic gaming series goes, I can’t think of better than that. Can you?

One Reply to “My Thoughts on Sonic Mania”