If there was one thing the fledgling GX4000 needed, it was an unquestionably epic (and preferably exclusive) action title. In Fire & Forget II it almost had one.

Though the original Fire and Forget appeared on everything from the Amiga down to the Spectrum, the sequel was launched onto a much smaller array of consoles. In fact, On the 8-bit side, the only other machine the game appeared on was the very machine the GX was trying to displace: the Sega Master System.

Consequently, Fire and Forget was a crucial territory over which the battle for best budget console could be fought.

And what an epic battleground it made, too. Quite clearly channeling Atari’s classic arcade game Road Blasters, Fire and Forget II has a very simple premise: the player must stop 5 progressively harder terrorist convoys from detonating a futuristic city. They do this by traversing winding stretches of desert highways, catching and destroying the leader of each convoy while blasting anything that tries to stop them.

Such a premise was hardly original, of course. But thankfully Fire & Forget ii had a couple of tricks up its sleeve. For one, there was the car. not only was the main character’s steed a sleek Lamborghiniesque affair, but the car had the ability to transform into a jet, allowing the play to control both there x and y axis. Not only did this feature help to add a strategic nuisance that would have been lacking in a straight Road Blasters clone, but it was pretty damn cool as well.

On top of this unique player vehicle, Fire and Forget also had a nifty post-apocalyptic setting to boot. Placing the player into a wasteland, the badguys are all either robots, futuristic cars or bike-riding “cyber punks” – and you have to admire any game that gives you an excuse to write “cyber punk.”

In theory, it’s all pretty good. Unfortunately, things fall apart quite quickly when you get into the action: 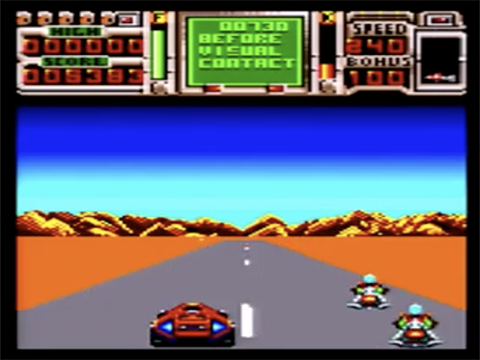 Looking at GX version Fire and Forget 2 in isolation, you can see from the graphics alone that things have gone pretty seriously awry: DayGlo-orange sand, a small playing area and fuzzy sprites (that channel the worst of CPC graphic design) all combine to form a package which is somewhat unpleasing on the eye.

Things only seem worse when you compare it to the Master System, however. Though the Sega console arguably had a worse player sprite, the combination of a more natural desert sky alongside a wider playing field and sharper, defined enemies makes for a much more appealing game to look at.

And things turn further south once the titles start to move, too. Where the Master System version moves at the kind of blistering pace you’d expect from an arcade title, the GX4000 version is chronically slow. It has a consistent frame rate – i’ll give it that – but its consistently below 25fps, which makes for a jerky,  unimpressive experience. 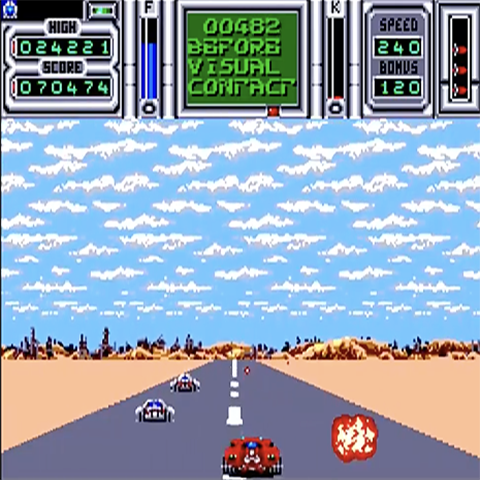 The Master System version in all its colour-correct glory

This jerkiness is made even worse by the constant feeling that you’re missing the key frames. When swerving left to fire at a target by the roadside, for example, it often feels like you have no window for hitting the target, with your show moving from “too early” to “too late” without you having had a sweet spot where you come have landed a blow on the enemy.

There’s also some questionable graphics choices involved. All too frequently, you’ll have gun towers positioned right next to the orange sand firing orange bullets at you. This can be particularly infuriating if you’ve transformed into the jet, as orange-on-orange isn’t exactly easy to pick up.

The Master system doesn’t have everything is own way, mind you. Though its sprites are better defined, they’re generally smaller than the GX sprites, and use less colours. This can make it difficult to tell the difference between enemy vehicles and friendly pickups – a factor which is especially unhelpful considering the blistering pace at which the Master System version moves at.

There are also a number of problems that appear in both versions too. Whether orange or yellow, the road side in both versions is devoid of any kind of detail. Though The backgrounds are nice enough – each level has you progressing closer towards a futuristic metropolis which is depicted vanishing into a mushroom cloud if you fail – without the extra context provided by roadside scenery, each level just feels dull and lifeless. 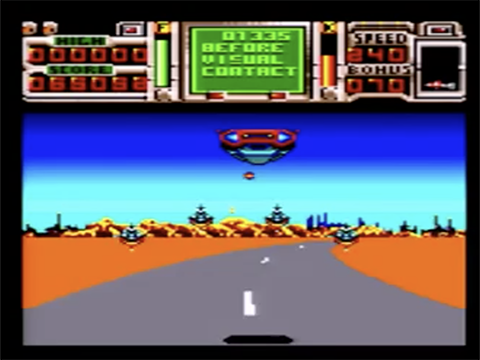 The ability to fly is still pretty cool though

Then there are the controls. Driving games which feature weapon functions generally don’t work well on two button control pads, and this is no exception. Though The controls aren’t fundamentally broken, the deployment of the fire and transform controls onto the face buttons means that acceleration and braking is mapped onto the d-pad, which never feels as engrossing as having proper accelerator and break controls.

Finally, the game mechanics themselves all feel a little loose and off. Each stage contains a counter which shows the distance between the player car and the leader of the current enemy convoy. Even when this drops to zero, you may still have to work your way past several enemy waves before the boss will appear. On top of that, the enemies themselves also feel a bit random and never quite seem sure whether they wants to fire with you at deadly accuracy, or mill around in the outside lane. 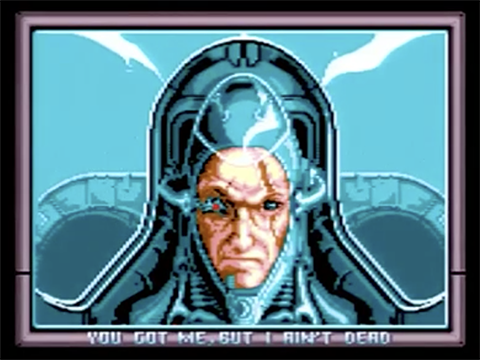 Overall, Fire and Forget is a bit of a disappointment on every level. A more streamlined game in its inception than something like Copter-271, Fire and Forget could have been the game to show us what the GX4000 could really do, but the action never lives up to its stellar setting. There are elements which do stand out for the better – the villain’s Gamesmaster-esque cyborg head turning between stages to taunt you is jolly enough, as is the variety of the music – but the core gameplay is too slow, clumsy and random to leave any sort of lasting impression that doesn’t involve frustration and disappointment. Regardless of system then, Fire and Forget II, is a game that most definitely lives up to the expression found in its title.