The arcade business of the 80s and 90s was a decidedly daunting one. While some games achieved immortality by being ported to every home platform under the sun, less popular titles died an anonymous death, living on today only through obscure ROM dumps found on dodgy emulation sites.

This definitely wasn’t a fate that befell Atari puzzler Klax, however. Originally released in the arcades in 1990, Klax quickly found itself pretty much everywhere: it was released on the Amiga and Atari ST, it was ported to the aged microcomputers, it was the first title to be simultaneously ported across Sega, Nintendo and NEC’s platforms. It was even one of the last games to be released for the Atari 2600. Oh, and it was ported to the GX4000, of course. 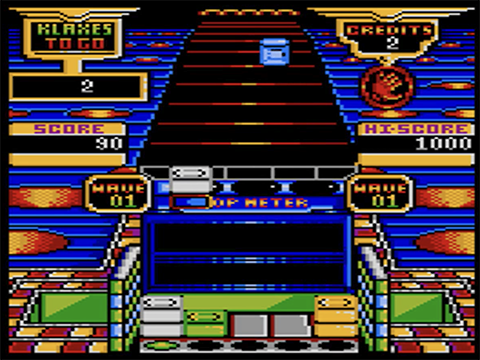 But hang on a second, what made Klax so port-worthy? It’s definitely an interesting question – especially when you consider how relatively little influence the puzzler has had on the wider development of the genre. The origins of Klax lay with the Tetris fever that took hold of the industry towards the end of the 80s. Though intrinsically linked with Nintendo today, in 1989 Tetris was something of a legal minefield as multiple companies (including Atari, Nintendo and two different Robert Maxwell subsidiaries) all claimed Western publishing rights.

Though Nintendo were of course to be the eventual victors, Atari still had a successful Tetris arcade game on their hands – an arcade game which desperately needed a follow up. Though Klax was to have many design choices that would stand up in their own right, the basic design lays bare Atari’s need to have a title that exploited popular familiarity and affection for Tetris, while simultaneously containing no material that could be potentially actionable in light of a legal set back.

Consequently, Klax definitely feels like a different kind of puzzle game to the competition. Rather than the usual two-dimensional rectangle playing area, the main Klax screen is dominated by a giant pseudo-3d conveyor belt. The player is tasked with collecting the coloured tiles that shuffle along this belt and then using them to create tic-tac-toe-style groups of matching colours in the 5 x 5 grid below. 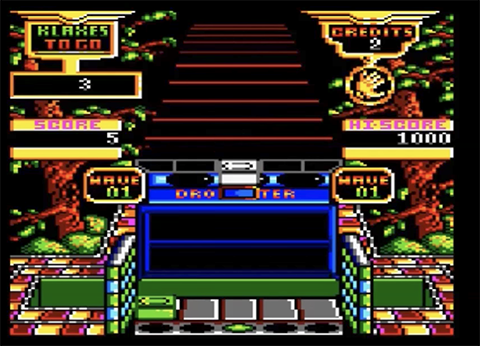 This is an interesting design. Where Tetris had a single win and loss condition (you scored when you cleared a line, you lost when the screen filled up,) the tic-tac-toe based design of Klax allows the player to score in multiple ways (tiles can be cleared by matching horizontally, vertically or diagonally.) If that makes Klax sound a little easier than Tetris, theres a small but very important caveat: the player has multiple loss conditions as well. Not only will allowing the tile grid to fill up trigger the end of the game, but failing to catch three individual tiles before they plunge suicidally from the end of the conveyor will put a premature end to the experience as well. Eeek.

These design choices come together to make a game that is absolutely frantic to play. While on the one hand the set up is relatively familiar – at its core, the challenge is similar to Tetris to the extent that the player has to deal with the combined tension of having to solve the puzzle below while worrying about drops from above – but by compartmentalising the two different challenges into separate game mechanics Klax feels like a very different game. Especially since its’ scoring mechanics seem designed to push players towards riskier and riskier play. Why match 3 tiles horizontally for 1000 when you could earn 5000 if you hold on for a diagonal?

If it was a work of genius from the perspective of the player, it was incredibly clever from a technical angle too. Knocked together by David Akers in a few weeks, the game wrapped incredibly simple core mechanics around pleasing but easily scalable/removable 16-bit presentstion. Written in Amiga basic, it was rapidly ported to the arcades and from there to. . . Well, pretty much any machine that had a capacity to display graphics really. To reference the game’s strap line, it was the nineties and there was plenty of time for Klax. 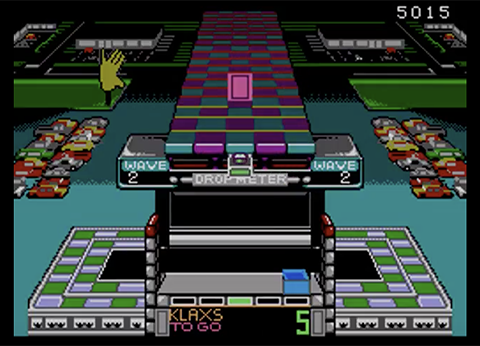 So what of the Gx4000 version? With the original already a big hit in the arcades and the basic design so readily portable, it probably isn’t surprising that, despite the GX finding the support of only a handful of titles, one of them happened to be Klax.

It’s a really solid port too. The graphics do have that trademark hazy Amstrad pixelation about them, but the game world is bright, colourful and appealing. Though the animation of the tiles isn’t quite as smooth as the original arcade version, the GX shuffles them around nicely enough. As a negative, the gameplay is almost entirely devoid of music (bar the triumphant trill that plays when the player makes a Klax), but this is exactly the same in the original arcade machine and all of the other ports.

Indeed, much like the presentation, the gameplay made the transition to the 8-bit platform intact. The stages evolve with the same sliding scale of difficulty as the arcade, and though the controls are quick and responsive, the fraught nature of gameplay remains as difficult as if the player was sitting in front of the original machine.

The portability of Klax has a sting in the tail though – because the core gameplay ported so well to so many different platforms, it’s difficult to really recommend one port over the other. Though the 16-bit versions did manage to stand apart slightly thanks to the higher definition of their graphics, the core gameplay remains the same across the spectrum.

Even if we restrict ourselves to just the 8-bit machines, it’s tricky to state that the GX4000 is categorically superior or inferior to, say, the NES or the Master System versions – and that’s before we acknowledge that there were slim differences between the CPC and the GX4000 games. Though the GX version boasted slightly smoother animation and a variety of different backgrounds, it’s largely the same experience at its core. 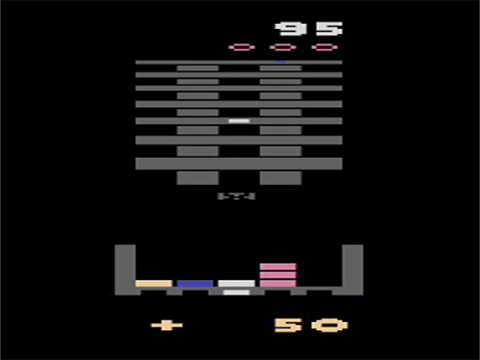 Consequently, though It may not be the 90’s anymore, if you think there’s still time for Atari’s unusual puzzler there’s definitely far worse games to invest your time in. You may be better off trying to track down one of the more mainstream versions of the game though, as there’s nothing to see on the GX version that, as usual, you can’t find elsewhere. GX4000 Klax is a fantastic game in its own right, but utterly pointless in the wider context of Klax ports.