There are so many predictable choices for games to play over Halloween, aren’t there? Silent Hill, Resident Evil, Fatal Frame, Clock Tower. . . hang on, I appear to just be listing random “survival horror” titles here, but you get my point. Let’s look at something a little less usual today, shall we? Let’s look at. . . Devilish on the Megadrive.

The first title to be developed by (unfairly anonymous) developers Genki, Devilish definitely defies your expectations. Opening with a lullaby-like twinkly soundtrack and a story involving a happy royal couple and a jealous demon, it’s easy to presume that what follows will be a platform adventure based around the monster kidnapping the girl and the heroic prince leaping into hell to rescue her. 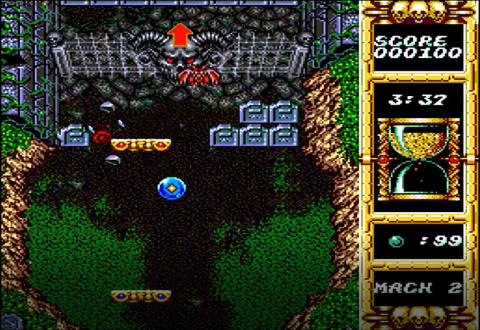 But no no! That’s all wrong! Instead the demon decides to turn them both into. . . erm . . .giant stone paddles before a mysterious demon-busting blue orb helpfully appears from the sky. Yep, if you hadn’t guessed it, Devilish is actually a rather ambitious bat-and-ball game.

Leaving aside the questions of how the royals have retained sentience post-stone transformation and how they’re able to propel themselves around without any legs or arms, Devilish is a pretty unusual game. Though the basic mechanics are familiar to anyone who’s played a bat and ball game (use the paddles to keep the orb on screen and direct it towards anything that seems breakable) even grizzled Arkanoid veterans may not be prepared for Devilish’s sense of scale.

Though the game only has 7 stages, the area each of them covers is huge. That’s right – Single screen games were for the old 8-bits, grandad: scrolling was what all the cool kids were doing. In fact, not only did Devilish implement scrolling, but it scrolls all over the place. Rather than simply spread out horizonally or vertically, the later levels of Devilish are legitimate block-filled mazes, with multiple routes to find and complete.

On top of that, Devlish also has some nifty boss fight action as well. Rather than the single end boss found in classic bounce-’em-up Arkanoid, every stage contains its own unique larger-than life monster (from giant demons to a surprisingly aggressive clock face) that has to be defeated before the player can progress. 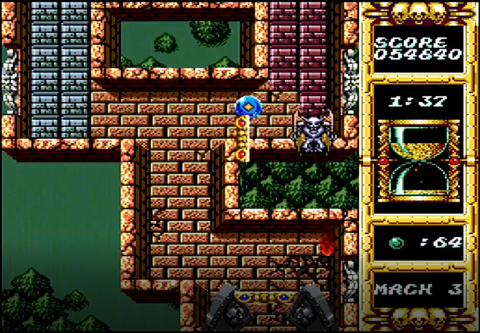 Now, I don’t want to suggest that Devlish is a case of style over substance, but the presentation definitely plays a huge part in holding the player’s interest. Each stage has a particular theme that shapes its boss, general character and the kind of bad guys and interactive elements it contains. There’s a zombie-packed grave yard with gates that have to be battered open, a mechnical stage with huge cogs that carry your sphere around, and an underwater level with a cool wibbly-wobbly water effect . Oh, and a fiery demon-friendly volcano, of course.

These graphics aren’t exactly ones you’d use to showcase any of the Megadrive’s technical capabilities, but they are detailed and feature a whole range of nice little effects and touches. They may not be showy, but they’re easy enough on the eye and definitely compare well with similar experiences like fantasy pinball title Dragon’s Fury. The sense of character they add to each stage does a great job of papering over any cracks in the games’ limited concept and help provide a real sense of progression.

The soundtrack helps with this too. I doubt it’s going to feature near the top of many “top ten Megadrive soundtracks” list, but its all driving malevolent basslines and catchy twinkly melodies that suit the fantasy/demonic nature of the subject matter well enough and help to add dramatic tension where it’s needed. 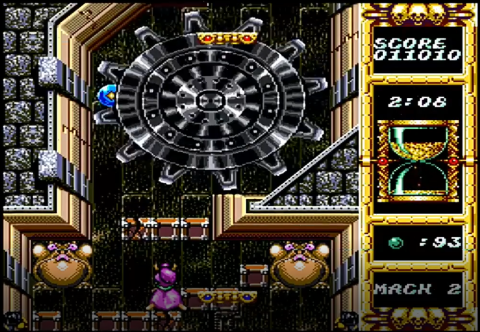 It’s all good so far then, but there are a couple of issues holding the game back. Chief among these is the games high level of difficulty. The player can take a maximum number of just four lives with them into the game world, and there are no continues on offer at all. Though it is possible to acquire powerups and 1ups, completion of the game on normal is a pretty tall order.

However, alongside a high base level of difficulty, the game features punishing time limits too. If you get held up even briefly in a chamber or have an extended battle with one of the games bosses, running out of time will not only rob you of a precious life but reset all of your progress for that level as well, stacking the odds against you even further. Ouch. 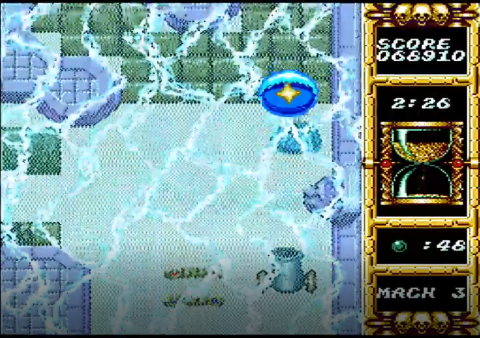 The time limit is especially problematic thanks to the second main issue: sideways movement physics. Bouncing up and down the screen generally works as expected, but the second you need to start traveling laterally, the orb starts bouncing erratically. It’s worth noting that you are able to rotate the main paddle through 90 degrees in order to make it easier to move the ball sideways, but this doesn’t really help when the ball inexplicably flies off at a 45 degree angle despite the ball coming in straight.

Overall, Devlish is definitely an interesting game. Not only is there nothing quite like it on the megadrive, but you can tell the developers worked hard to give it is own identity and charm. Its just a shame that the few faults it does have are so exasperating. I’m not saying it’s frustrating, but if you do play it this Halloween, you may find that you don’t need a costume to turn into a bit of a monster.