Thankfully, this definitely isn’t a problem that affects Gilbert: Escape from Drill – a game whose averageness extends only from the mid-ground that sits between its towering successes and crashing failures.

Based on the nonsense-spouting, snot-propagating alien co-host of children’s programme “Get Fresh”, Gilbert was perhaps the perfect candidate to be the victim of a cheap, poorly produced cash-in video game that aimed at taking advantage of the fleeting popularity of his name.

Thankfully, Escape From Drill had loftier ambitions than that. Set between the recording of two seasons of “Get Fresh”, the inhabitants of Drill have grown tired of Gilbert’s television-related boasting, and have decided to hide important parts of his spaceship in order to stop him from resuming filming. It’s up to the player to guide Gilbert through the labyrinth-like streets of his home world in order to find the objects he needs to repair the “Millennium Toilet” so he can escape to Earth to continue making television of questionable moral fibre. 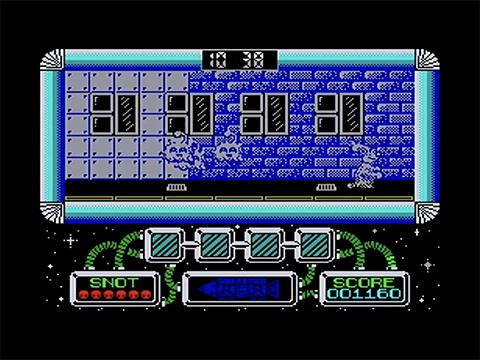 The streets of Drill are where we find Escape From Drill’s first major successes and failures. There’s definitely a lot to love: The Gilbert Sprite is detailed and as full of life as his TV persona. The map is large with lots of different areas to explore: there are gift shops, restaurants and milk bars that Gilbert is free to wander into. Everything is also coloured with the full range of the Spectrum’s vibrant palette, making for a good looking game.

At the same time, however, Drill is not as fun to explore as it should be. Though the Spectrum’s limited system resources make it inevitable that there would be a certain degree of repetition in the background assets, the extent of the similarity found in the design of the city streets makes the playing area somewhat disorientating.

Samey streets are bad, but a more pressing problem is the enemies. The inhabitants of Drill definitely seem desperate to keep Gilbert from leaving, as their attacks are relentless: Shop assistants use sweets as missiles, sea mines bob in his general direction, futuristic burger dispensers launch fast food towards his cranium and kamikaze armies of critters bound onto the screen all at once, desperately trying to collide with our hero.

Now, you may be thinking at this point that there’s nothing wrong with a bit of a challenge – and that is definitely a fair enough sentiment – but this is where things get a bit tricky. Though Gilbert has the ability to launch globules of snot, morter style, towards his enemies, this generally isn’t enough for him to defend himself. Not only does the enemy attack from both sides of the screen, but they do so in too great a number for Gilbert’s phlegm producing abilities to handle. If the were one-hit-kill mechanics at play, Escape From Drill would literally be impossible. 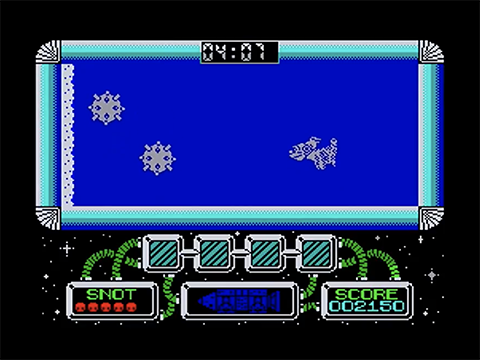 Thankfully, Escape From Drill does not feature one hit kill mechanics. In fact, Gilbert can’t actually die – the only thing the player needs to worry about is a 24 hour Count down that represents Gilbert’s deadline for travelling to Earth. Though each each enemy collision gives a time penalty, it only robs Gilbert of a couple of minutes of this countdown, so has no real effect in the general scheme of things.

While this definitely prevents the game from being too difficult, it does mean that the player is bogged down considerably during the exploration part of the game for something that has no real effect on the strategic side of the gameplay. Hmm.

Thankfully, Gilbert has more to it than wandering through the world battling endless streams of baddies. Hidden in the corners of Drill’s 5 milk bars are arcade machines that Gilbert is able to play, with each offering the location of a missing spaceship piece as Gilbert’s prize for winning. 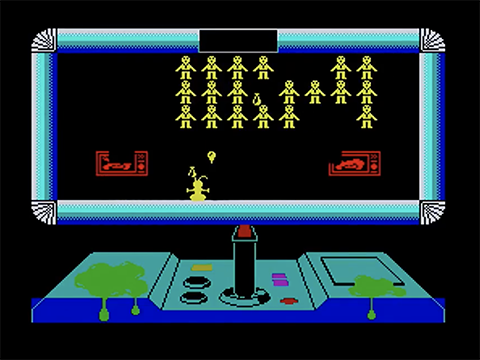 It’s difficult to convey just how amazing it was too be able to play these arcade machines back when Escape From Drill was originally released. Featuring their own music and contained in a cool crt-style graphical frame, in-world arcade games were not the kind of thing you really saw on the Spectrum.

The choice of games seemed well judged too: Human Invaders, for example, is an amusing inversion of Space Invaders, while the pre-Nokia version of Snake (called Greed) further demonstrates the timelessness of what was to become the quintessential mobile game.

There is, however, one small problem. As with so many mini-games throughout the ages, the one thing that lets these arcade games down is the level of difficulty. While the core gameplay of each game is intact, some of the refinement found in the original experiences is missing. In Human Invaders, for example, some of the rules regarding how often the not-so-puny humans can fire seem to be missing, resulting in a near-constant barrage of fire.

With that said, the difficulty doesn’t prevent the mini games from being beaten, so it can’t be said that they are completely broken.  They are all still good fun to play (if a little frustrating.) It’s just a shame that losing has such a big affect on Gilbert’s clock – while being hit by an enemy will rob a minute or two, losing at an arcade game removes a whole hour from the timer. Blimey. 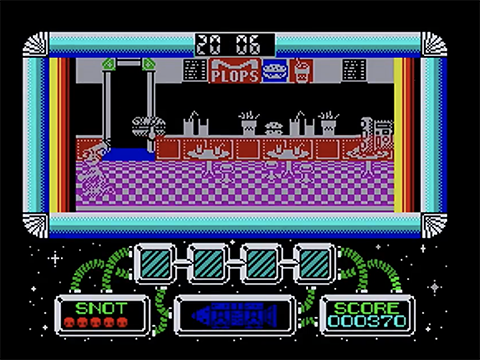 Who knew that burgers could be so deadly?

Escape from Drill, then, is an interesting specimen. Is it the first Spectrum game I would want someone unfamiliar with the system to play? Probably not – It may have some hugely impressive highs, but these are tempered by some otherwise questionable design decisions that put it lower in the pecking order than a number of other notable titles from the same era.

This does, however, make it an interesting case study in Zx spectrum game design.

After all, it really is incredible that a spectrum game like Gilbert could ever be considered average. In the early days of the Speccy, a good chunk of its software library was devoted to dodgy coin-op knock offs that did little to hide their arcade-inspired origins. 1983, for example, gave us the likes of “Defend” “Space Zombies” and – most copyright baiting of all – “Pacman”. These were all basic reinterpretations of the smash-hit games they were based on: The graphics were simplified, the sound was  inconsistently implemented and any text was replaced by the Zx Spectrum system font. Consequently, in 1983, most of Gilbert’s mini games would have been potential commercial releases in their own right. 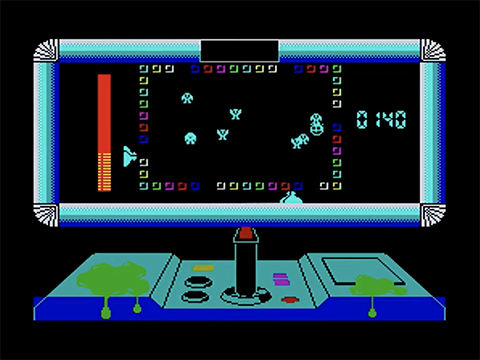 Nonetheless, by 1989, most of the mechanics implemented in Gilbert could be considered relatively standard: games had long since abandoned the Spectrum system font for their own typography, and since the arrival of the the spectrum 128 many titles had boasted multiple in-game tunes like those found in Escape from Drill. The labyrinthine world of Drill also had a clear precedent in games like Dizzy and Jack the Nipper, while titles like runaway-hit Robocop had set a precedent for mixed genre gameplay (even if they didn’t have the awesome arcade concept.)

Thus, though not massively notable in itself, Gilbert can be an incredibly useful specimen for charting the incredible mountain spectrum game developers had traversed over the course of the system’s life span. Horace, Miner Willy and their contemporaries were interesting and outstanding characters in the system’s early days, but its worth remembering that after 1986 the games being released for Sinclair’s box of tricks were an entirely different breed.