This is a topic we’ve covered before – and i suspect it’s one we’ll cover again – but it’s worth pointing out that the sunset era of the Spectrum’s life were significantly different to the micro computer’s formative years. Thanks to Amstrad’s cheap 128k models becoming the defacto spectrums in the market place, issues like awkward in-game silences and multiple load points were (mostly) a thing of the past.

This was only true if you actually owned a 128k Speccy, mind you. Fortunately, most publishers accomodated unlucky 48k owners by effectively turning each title into two games in one: side A of a tape would contain a 128k version with all the bells and whistles, side B would contain a version for 48k owners that would basically be the same game albeit with only a single tune on the title screen and endless loading points.

However given that multiloads and music were generally the only differences between the two, few early spectrum games were later remade for the 128k machines. This made sense: 48k games were generally completely compatible with the later machines, with many not even needing the Speccy to be put in 48k in order to work.

Strangely, one game that did happen to be remade was Ghostbusters. This seems really weird to me for a couple of reasons:

first, as a relatively small and early Spectrum game, the whole of Ghostbusters fit into the memory of original 48k machine in a single load, meaning music was the only reason for a remake.

Secondly, and more personally, i actually owned a later budget release of the game that definitely only contained the 48k version. Until very recently i had no idea the 128k version even existed. Egad! 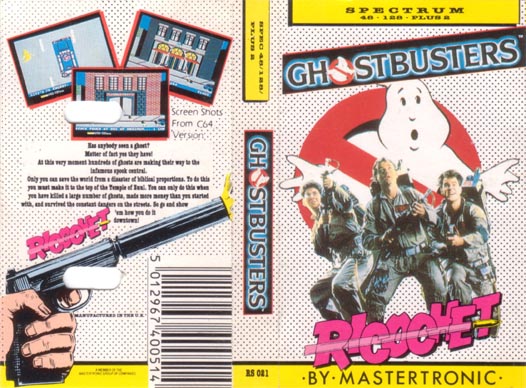 My copy had this interesting cover art. I ain’t afraid of no polka dots!

On loading the two up, the experiences are, predictably, pretty similar. We’re presented with two identical teletext-style copyright screens, 2 identically basic control selection screens and these are followed by a two sing-along versions of the Ghostbusters theme.

This, however, is where it gets a bit weird. Though both versions begin with the same incredibly low quality sample, and both feature the same chubby pixel art version of the Ghostbusters logo (that also happens to be facing the wrong way), there are differences between the two.

The most obvious of these is the music itself: where the original game recreated the film’s theme using the simple monophonic speaker beeps utilised by many games in the early Spectrum era, the 128k version utilised the extra instrument sounds made possible by the Ay 89-12 soundchip included in the 128k models.

On top of the music, There is however one further (and pretty cool) difference between the two. Where the 48k game deployed the mechanism of simply changing the colour of the lyrics as they’re supposed to be sung, the 128k has an animated ball that bounces (almost ) in time to the music, a feature which brought it into line with the original Commodore 64 version. 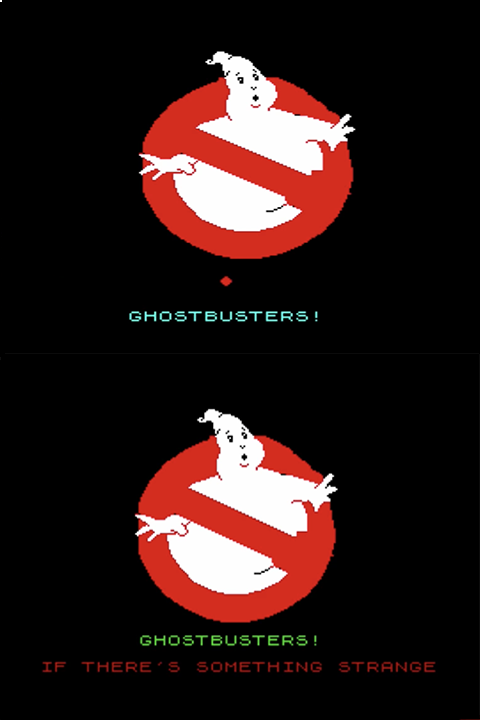 Ghost Busters! (weirdly, while the 48k probably looks better as a screenshot, the bouncy ball is much cooler in motion. You;ll have to take my word for it)

From here, the game is initially the same with few meaningful differences. The introduction screen is still a slightly vile yellow, and (as with most early Speccy games) the Spectrum system font is used for all the text. The following screens – where the player has to equip their choice of Ghostbuster mobile – are also the same. 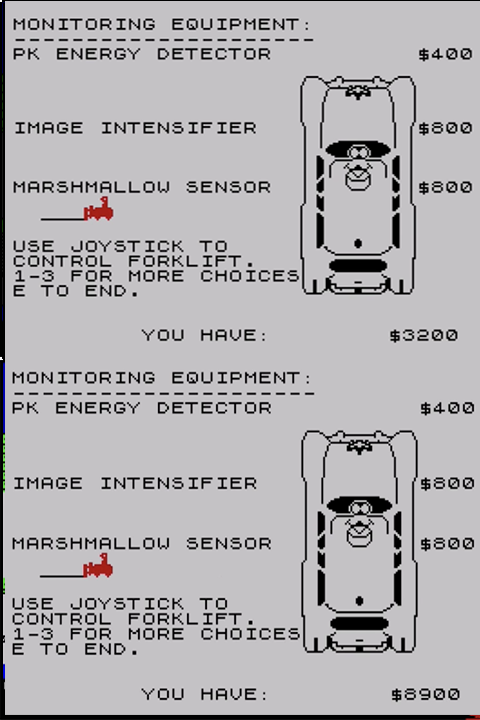 However there are a myriad of subtle artistic changes throughout. Perhaps the most obvious of these is the music. As the sound generation in the 48k Speccy was driven completely by the processor, it was tricky for Spectrum programs to run sound and game code simultaneously. Consequently, 48k Ghostbusters ended up as a largely silent experience. Well, aside from the crackly (but still highly impressive) speech samples which cry “Ghostbusters!”/”He slimed me!” When the player catches/fails to catch a ghost.

Where the 48k version is silent, the 128k version was bursting with music. Well, a piece of music anyway – the only tune in the game is the AY version of the movie theme that we heard at the beginning. This has to be better than nothing, right? Maybe. Though the Ghostbusters theme is a classic, a single game can potentially last about half an hour, meaning that the whole theme will play for about 8-10 times on the trot. But hey, you’re a big fan of the theme tune, right? I hope so. 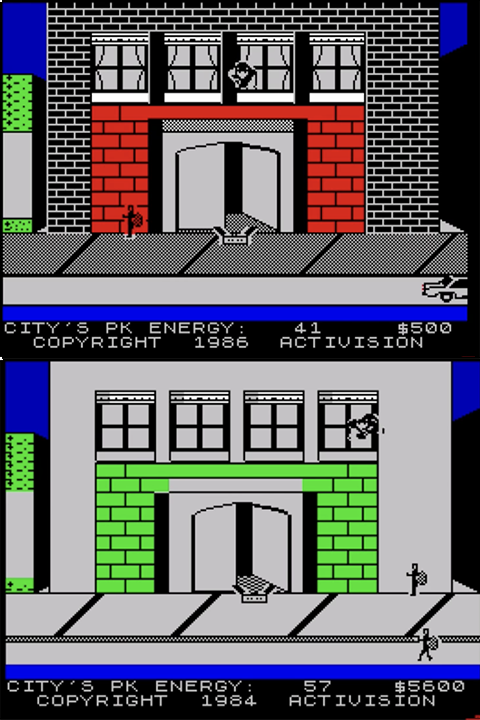 The first location you’re likely to visit! notince the extra details around the brick work, windows and pavement?

Though the music is perhaps the most immediately obvious addition, the artistic changes are just as thorough – if not as striking. Though the map of New York is the same, the exterior locations you visit in 128k game (for some reason ghosts never turn up in doors) feature a much greater degree of detail than in the original 48k version. This extends as far as Ghostbusters HQ itself, which no longer looks like one of the generic building types with the word “Ghostbusters” written on top of it.

Indeed, alongside the changes to the exteriors of the buildings, another nice cosmetic change is the presence of your ghostbusting mobile itself. Absent from the Ghostbusting scenes in the 48k, its parked up and ready for action in the 128k remake. Hurrah! 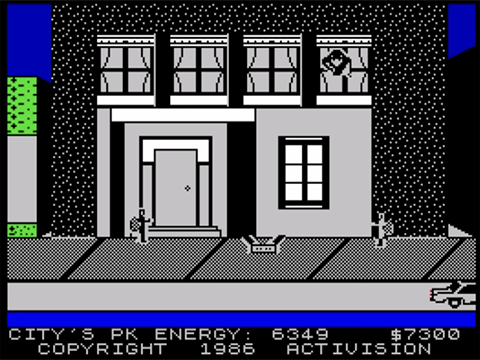 So far, all the changes have been fundamentally cosmetic. However if the player manages to survive to the end of the game by earning enough to repay the initial bank loan before the city’s PK energy has reached its peak (its turns out the bank would quite literally let the world slde into the depths of hell before they let you off a mortgage payment), the 128k version’s biggest change is revealed: an entirely different end game.

In theory the final task in both games is identical: the players have to sneak past a bouncing marshmallow man into the entrance of the Shandor building in order to stop Gozer and save the world. In the event, The two are completely different. Where the Shandor looked suspiciously like a recycled GHQ in the original 48k game, it has its own distinct, slightly zoomed-out panoramic scene in the 128k upgrade.

This redesign has one definitive upside: If the player completes it, they get to watch a cutscene where Ghostbusters are seen closing the hell portal. This is definitely an upgrade over the original, where the only ending was a mustard screen that explained that you closed the portal and saved the world.

However, the redesign also features a significant downside: where the original entrance was easy enough to navigate into, the smaller redesigned entrance is a nightmare of wonky collision detection. Just as you think you’ve got your Ghostbuster to safety, he walks directly up into the Marshmellow man’s waiting foot. Argh. 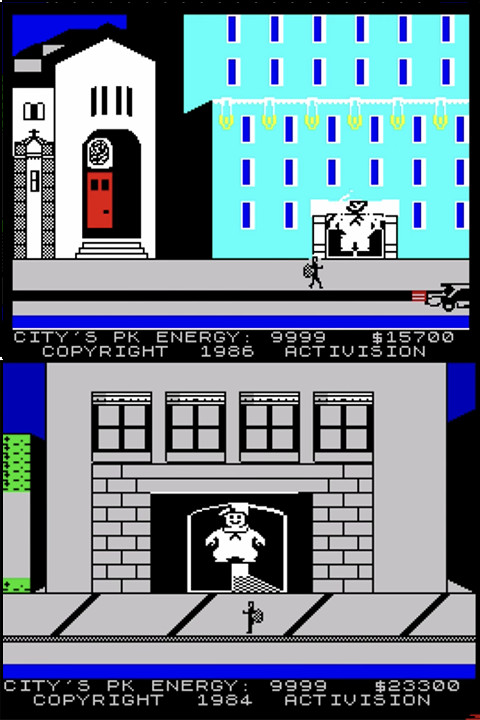 The 128k version of Ghostbusters is a bit of an oddity then. Released into a world that didnt really ask for it and which quickly usurped its position with the budget versions of the 48k game, it defies easy classiffication. Is it a fitting 128k upgrade? Well, given the ROM file weighs in at just 68k, its deffinitly a slight disappointment that some of the less attractive elements of early Spectrum game design made the jump to 128k unscathed. The mustard intro/outro screens, in particular, were prime candidates for replacement and could have dramatically reframed the game.

In the game’s defence, however, there were lots of changes that didn’t explicitly have to be made. Given the overbearing presense the music has on the game, it probably would have been enough to include the revised sound chip-generated version of the theme tune and call it a day. The extensive yet incredibly subtle changes to the building exteriors show a level of care artistry that can’t really be written off as a cash in. 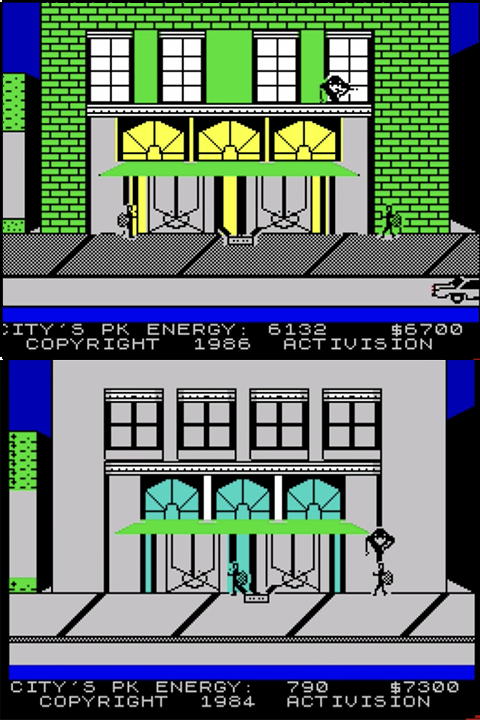 Nonetheless, and as a 128k fundamentalist, it pains me to admit that the 48k version is probably still the one to go for. Though the music and the artistic changes are nice enough on their own, they come with their own problems: The music doesn’t end properly when a speech sample is played – causing all kinds of weird held notes whenever the player catches/fails to catch a ghost – and though the revised backgrounds look better in screenshots, they add a degree of busyness that make it more difficult to track the ghosts you’re trying to catch.

Ghostbusters is 128k is an interesting experiment then, and that’s perhaps how it is best regarded. At the time, Sinclair User saw it as effectively being an expensive demo of the 128k machine’s soundchip, and its hard to disagree too far with this assessment. As i said at the beginning, few early spectrum games recieved bespoke 128k versions. Perhaps Ghostbusters gives us insight into why.